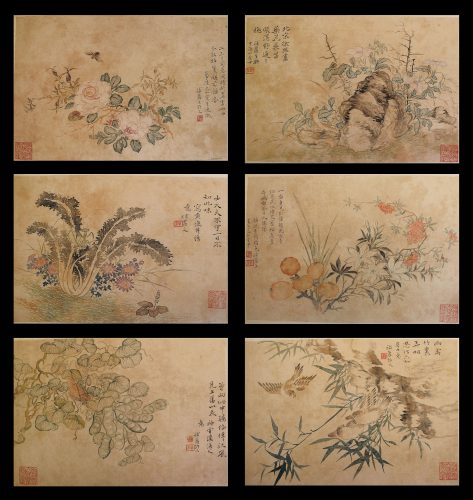 Inscriptions:
1. “The second and third months
are when these blossom best.
Plucked and placed in a book
in winter when stuck in the hair
there will still be lingering fragrance.
Done after Lu Baoshan’s (Lu Zhi) drawing
from life, an extant piece of jade.
Xu Wen, called Buluosheng.” Buluosheng

2. “Xu Xi of the Northern Song painted
medicinal flowers and herbs and truly captured the flavor of the untamed
wilderness. Buluosheng followed him in the Haishan Hall.” Huawen

3. “Scholar-officials cannot go a single day
without knowing this pleasure. I painted in the spirit of Huang Junjing’s saying.
Buluowen.” Huawen

4. “Once met and then again
calls for rush mats and goblets of wine;
boys and girls in green and red
have what to bother them?
Tying up artemisia and inserting
pomegranate
it is truly like a painting.
I followed Shen Qingmen (Shen Shi) in
applying the color. Buluosheng
painted this in the Haishan Hall.”
Buluosheng; Huawen

5. “About these I once listenedto the tassels of
the pods;Protecting from the wind as that
ascends,like old mountain garments. I
followed the ideas of the Fisherman on
Cloudy Streams (Yun Shouping)
Xu Wen, called Buluo.” Buluosheng; Huawen

7. “Many thanks to the purifying river
that people have not touched;
Amidst rain it still provides
an umbrella for the ducks.
Following the painting-style of the lady from
He Country. Xu Wen, called Buluo.”
Huawen
8. “Yi Yuanji once did a landscape called ‘Beak
and Claws.’ Its conception was fierce and
moving, but people didn’t pay attention. In
play I here imitate him. Xu Wen, called
Buluosheng.” Buluosheng

9. “Provisions for a gentleman. I followed the
drawing-from-life style of the Master of the Ouxiang Hall (Yun Shouping.) Wen, called Buluosheng.” Huawen

11. “I once remembered that the night before
I had been in a drunken stupor,
Offering incense beneath the flowers, I strike my red heart.
Xu Wen, called Buluo.” Buluosheng; Huawen

12. “In the small courtyard among the autumn
wutong trees,
cicadas complain about the approaching
cold;
The wind brings, in the late afternoon,
the sounds of its leaves about to fall.
Xu Wen, called Buluo.” Buluosheng,/em> 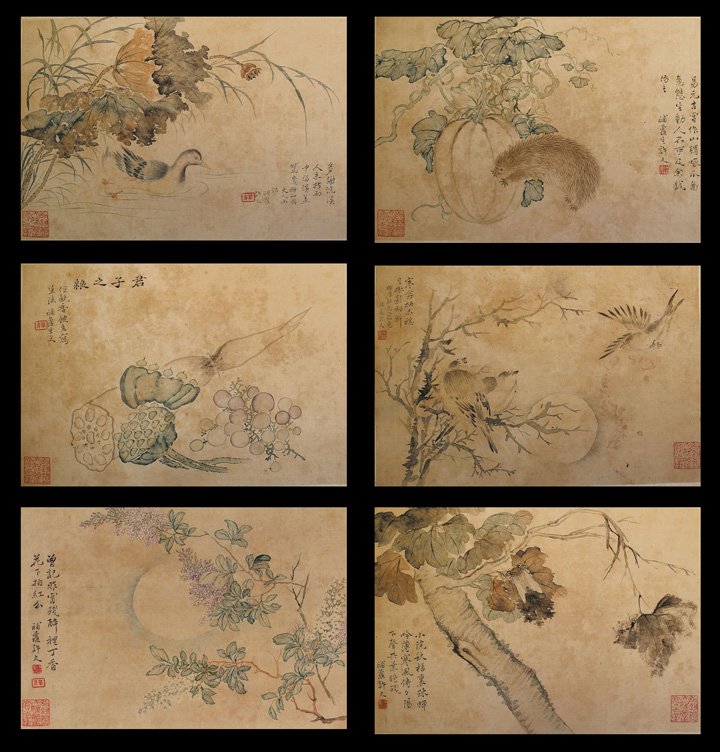