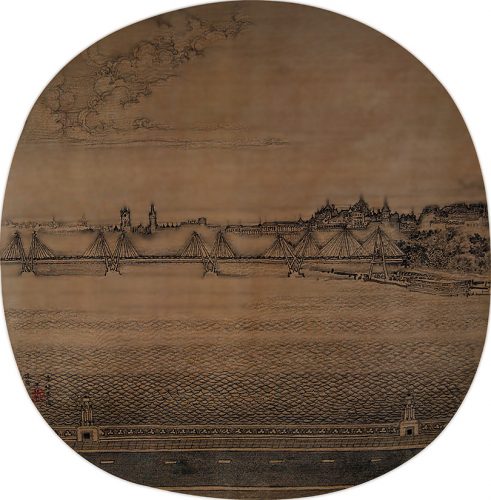 Inscription: “The morning waves of the Thames, painted in 2011. Jian Guo.”

“Poetic cityscapes,” “urban landscapes.” These terms were inspired to describe, categorize and conjure the mesmerizing works of the painter Xu Jianguo. Cities are turned into poetry through a delicate ink-laden brush that brings into being the physical features and realities of actual cities, easily recognizable by their topography and landmarks, within an aura of traditional, invariably Song-period, Chinese landscape painting.

In the present work, of ancient Chinese round fan format, a favorite vehicle of the artist, London’s landscape of iconic architectural structures stretches on the horizon, viewed from Waterloo Bridge in the foreground, through a tracery of Golden Jubilee Bridge’s steel cables. The Thames is turned into a memory of water and waves created by the 13th-century Southern Song painter Ma Yuan, who devoted an entire album of paintings to portraits of waves exclusively, and whose ghosts are seen in the rippling Thames. Whereas the mists rising over the water beyond the bridge are further nods to Southern Song imagery here there is a chill in the fog-laden air as clouds roil overhead, with the promise of a deepening winter.

Ma Yuan and his contemporaries at the Southern Song court in Hangzhou rejoiced in memorializing the magical scenery of their city’s West Lake, which included such edifices as the Leifeng Pagoda and the causeway forming a path across the lake. If Waterloo Bridge in the painting brings to mind West Lake’s causeway, or the tower of Westminster Abbey or Big Ben in the distance remind us of the great Leifeng Pagoda, it is surely not coincidental. However, unlike Ma Yuan’s gracious capital, the city of Hangzhou today is a sprawling urban center, appearing more and more like its contemporary Western counterparts and less and less like the romantic Hangzhou of yore.

Hong Kong, Shanghai, and Guangzhou are well known as subjects of Xu’s musings, which are imbued, as his present tributes to London, with Dureresque precision, delicacy and complexity. Xu’s paintings are indeed sometimes more reminiscent of European engravings than Chinese paintings produced in ink on silk. On more than one level then, Xu brings East and West together in a single gem-like work.

Xu was born in Shanghai in 1951 and as a child received instruction in traditional Chinese panting and calligraphy from the scholar-artist Ye Zhihao (1913-1988). Xu graduated from the Shanghai Theatre Academy with a major in art and by 1984 was in the United States where he had been given a scholarship at Bard College, receiving a Master of Fine Arts degree in 1987. His solid foundation in traditional Chinese painting, combined with an abiding interest in worldwide arts and culture and a distinctively creative and searching mind, has led to his unique world of “poetic cityscapes,” of “urban landscapes.” Xu has exhibited in mainland China and Hong Kong, Taiwan, England and the United States and presently lives and continues his creative journey in New York.