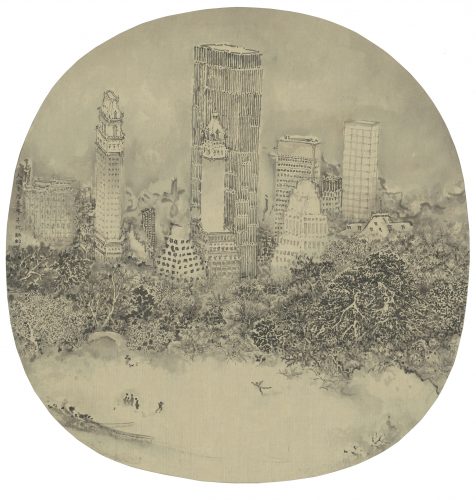 In one of his signature “poetic cityscapes” or “urban landscapes,” Xu takes us to Central Park in NYC. Beyond the Wollman Rink in the foreground, iconic buildings loom while a clear cold winter sky is suggested above. In the mind’s eye of one schooled in traditional Chinese painting, the jiehua, the ruled-line architectural ink painting of the 13th-14th century springs to mind and the round fan format popular during that time is also familiar. The physical features and realities of actual cities, easily recognizable by their topography and landmarks, are thus presented within an aura of traditional Chinese painting and executed with Dureresque precision, delicacy and complexity. Xu was born in Shanghai in 1951 and as a child received instruction in traditional Chinese painting and calligraphy and matriculated at the Shanghai Theatre Academy with a major in art, continuing his studies at Bard College in New York with a Master of Fine Arts degree awarded in 1987. Xu has exhibited in Mainland China and Hong Kong, Taiwan, England and the United States and presently lives and continues his creative journey in New York.