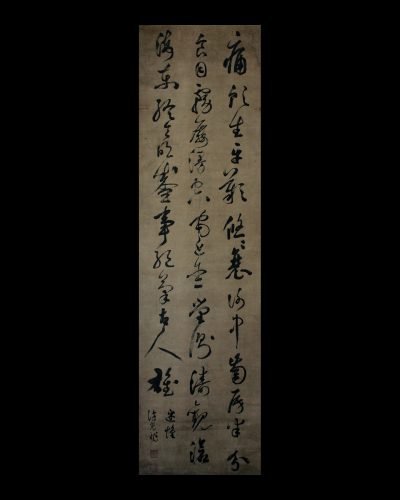 Xu Guangzuo was born in Shaansi province but was active in Hangzhou, Zhejiang province; his biography is included in the Hangzhou zhi, “Records of Hangzhou.” His birthdate can be calculated from a calligraphy handscroll recorded in the Shichu baoji and dated to the year 1616; there he gives his age as sixty-six sui, indicating he was born in the year 1551. Xu passed the prefectural examination and was appointed District Magistrate of Taiping district. His poems were later collected in the Xu Lingchang Ji.

Xu is said to have studied calligraphy with Tang Huan, and eventually became famed for his own writing. His writing appeared in such wood-block printed books as the Tangshi wuyan and the Shiyu huapu, and this too would have helped increase his reputation.