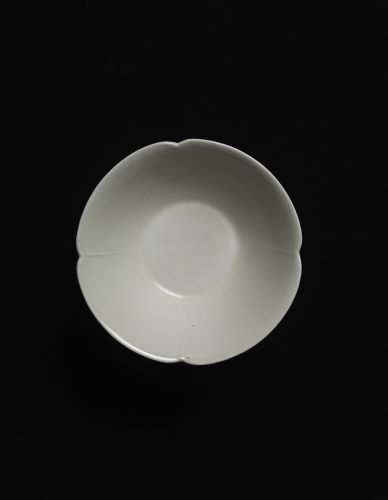 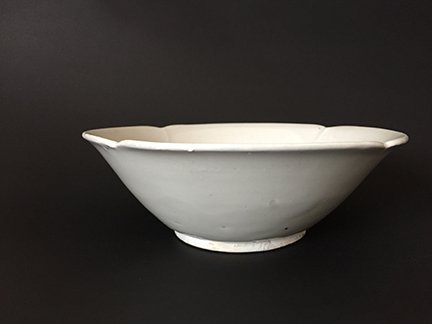 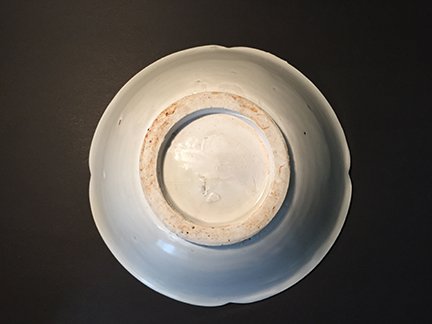 The bowl rises from a wide foot, the relatively straight sides slanting outward to a slightly everted and thickened mouth rim cut with four notches to create a lobate or foliate shape. A thin raised rib extends from each notch halfway down the interior of the bowl to further enhance the floral form. The foot has a square-cut broad rim surrounding the recessed base. The bowl is covered, aside from some areas on the foot and base, as well as on the cleanly wiped foot rim, with a satiny smooth, lustrous glaze of soft white color. The ware is compact, fine grained, and pure white.

During the 6th century A.D. a momentous development in Chinese ceramic history occurred with the production of a fine, high-fired white ware. The major centers of production during the Tang dynasty (A.D. 618-907) were Gongxian in Henan province and two areas in southern Hebei province, Xingzhou and Dingzhou. The similarity between Xing and Ding ware during the Tang period stymy written-in-stone attributions. Xing ware, however, commandeered the minds of poets and tea specialists and “Xing” or “Xing-type” became the preferred nomenclature for high-quality Tang white ware even if provenance was indeterminable, while “Ding” usurped the future.

Examples of Tang white ware include a bowl excavated from a Tang tomb in the vicinity of the Xing kilns (fig. 1) and a smaller but similar bowl was published in the catalogue of an exhibition at the Flagstaff House Museum of Tea Ware (figs. 2-3). That bowl was described as having abrasions on the interior that had resulted from the whisking of tea.

Based on the results of a comparative study of Xing and Ding wares in the Shanghai Museum by Fan Dongqing in the early 1990s, we might suggest that the present piece is a product of the Xing kilns with its smooth biscuit, the lack of tool marks, its even glaze with a relative lack of translucency, the absence of visible streaks, the glaze on the foot seemingly removed by simply wiping it off rather than the scraping away of foot ring glaze with a sharp tool as was practiced by the Tang dynasty Ding potters, and the absence of thumbnail marks around the foot.1

Dating might be suggested by a study of Xing ware shapes published in 1986 and the chart presented in that study reproduced in a 1998 study of white wares (fig. 4). The shape of the quatrefoil bowl no. 75, from period 3 designated as late Tang dynasty, is similar to the profile of the present bowl. 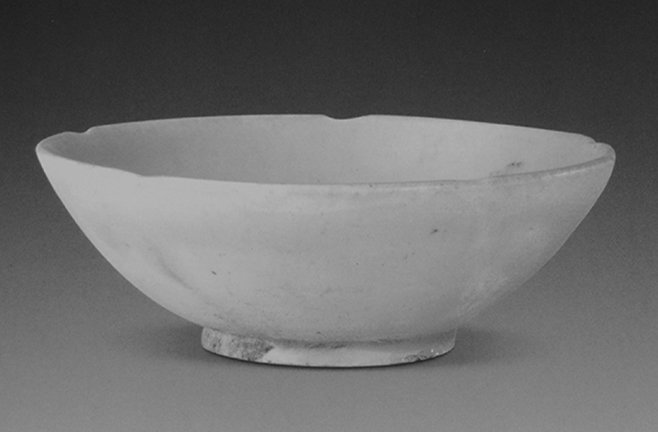 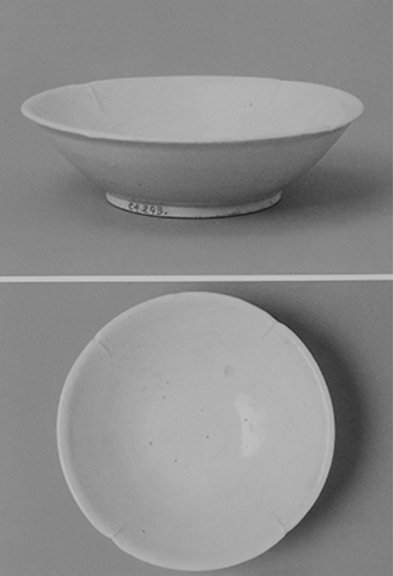 Fig. 3: Shapes of Xing wares, after Bright as Silver; White as Snow: Chinese White Ceramics from Late Tang to Yuan Dynasty, examples from the Kai-Yin Lo Collection, Hong Kong, 1998, p. 32, detail of chart taken from “A Study of the Development and Classification of Porcelain of Hsing Yao,” The Journal of the Institute of Chinese Studies of the Chinese University of Hong Kong, vol. 17, 1986.