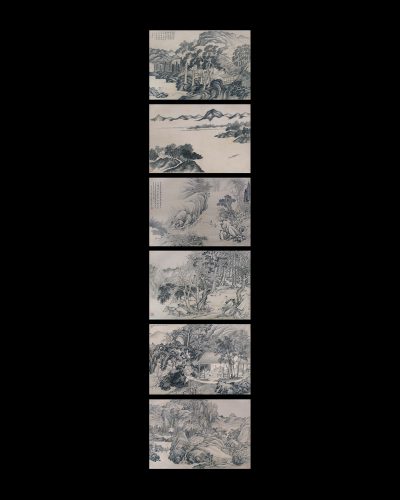 The pictorial forms, coloring, compositions, and brushwork of these six leaves are clearly based on the styles of Yuan literati masters and their Ming dynasty followers in Suzhou. And this is precisely what the artist himself indicates in his inscription, in which he mentions Zhao Mengfu (1254-1322), his wife Guan Daosheng, and Wang Meng of the Yuan, and Wen Zhengming (1470-1555) of the Ming.

Xiang Peiyu, called Xiaoqi and Kongting, was born in Xiuning, Anhui province, but moved to live in Weiyang, modern Yangzhou in Kiangsu province. He excelled in painting, especially landscapes, and a work now in the Shanghai Museum and dated to the year 1787 exemplifies the same refined literati style as does the present album of 1790. Both of these paintings make manifest the more conservative aspects of Yangzhou painting, found earlier in the works of Fang Shishu (1692-1751), who lived in the same city.

Leaf 1:
“Listening to the pines the Chan adept has ears that can hear,
in a secluded hut among a myriad trees;
Winds roil the blue-green waves where sounds are extreme,
and at the entry to the sea flies up an old twisting dragon (pine.)

Blue eyes indicate his intelligence and his ears more excellent,
pillars of the house stand firm within the white clouds;
On hearing a sound he goes to a place of silence,
mistaking a tall pine for an old dragon.

Leaf 3:
“The most honored things in life are princes and earls,
but fleeting wealth and volatile fame do not bring freedom;
Strive to attain this: a sliver of a boat,
in which to enjoy the moon, sing to the wind, return and rest.

Over a boundless expanse of mist and waves floats a tiny boat,
A west wind drops tree leaves on lake Wu Hu in autumn;
ally with seagulls and herons, not haughty princes and earls,
what matter if not fish are caught.
Zhao Mengfu 趙孟頫, rhyming with Chuan bozhuo 韻寄川撥棹

Leaf 6.
“Two days after the first day of spring during the year 1790, Xiaoqi painted this in the Kegeng Library at the age of sixty-nine sui.” Artist’s seals: Peiyu 「佩魚」; Xiang（項）