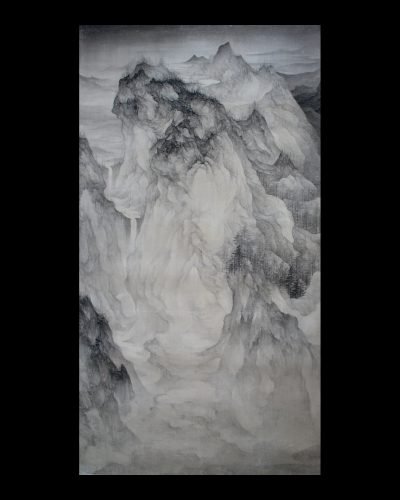 A loamy amorphous peak ascending from a river valley is the focus of this monumental painting. A narrow waterfall surges from a water source hidden in the hollowed out valleys in the far distance and tumbles down the steep ravine on the left. The central peak is on the edge of a mountain range that winds back into the distance with streams and hills without end rising on the picture plane and receding into the distance. Soft brushwork builds the earthy forms while luminous mists materialize from yet softer touches of the brush and lighter tones of ink. Dark inky accents define pine forests on the high ridges as paler trees behind give a sense of depth and recession.

The impressively large size of the painting is a major departure from the more typical, small-scale works for which Wu Qiang is best known. Those intimate worlds, where the landscapes are compressed and brought close to the picture surface providing safe place and passage for the tiny human folk that inhabit them, are eschewed here for a spacious realm of height and depth. The jewel-like and vaporous colors of the small-scale works are also left behind here as ink only provides the substance of form and atmosphere.

We are taken back effortlessly to the world of Northern Song period landscape painting with the 11th-century master Guo Xi in particular looming as the father of the present. But Wu Qiang accepts the past with a difference. We enter his composition by way of a void, are guided around the scarp, allowed to marvel at the length and depth of the mountain range and to gaze across one stretch of hills behind another into a distance without boundaries. Gone are the fore, middle, and background planes of the Northern Song; still present are its grandeur and monumentality. The palpable definition of form of the past master is eclipsed here by an atmosphere that dissolves forms and allows them back into being, as if a Southern Song landscape vision had intervened.

The title of the painting, “Mountains Where Immortals Appear,” stirs the imagination and we do imagine immortals existing in magical realms, like the one Wu has created here.