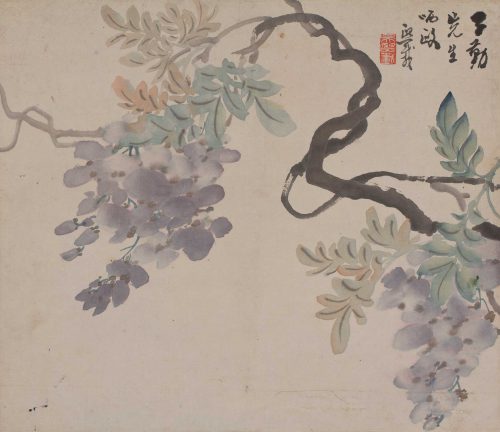 Inscriptions:
Wisteria: ‘For the smiling corrections of Master Pu-tung, Hsi-tsai.’

Artist’s seal on each:
Wu Hsi-tsai

Colophon:
By Ch’en Yen-hua (chu-jen 1902) in 1932:’…Among Master Wu’s paintings these two leaves are superb and should be treasured. After Jang-chih (Wu Hsi-tsai), only Liang Kung-yueh (Liang Yen, b. 1864) in our district did flower paintings with a scholarly air. Today there is no one like Kung-yueh, and how much more is this true of Jang-chih?…’ 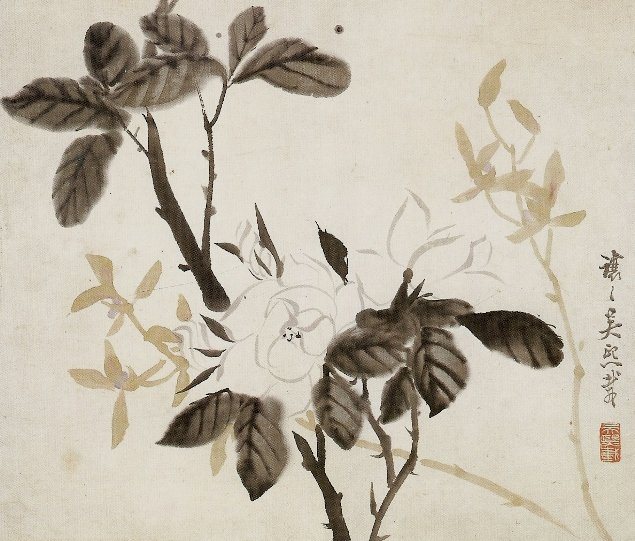 These paintings seem less like images of the natural world than virtuoso performances with brush, ink, and color that only incidentally make use of flower shapes in the course of the demonstration. And this is certainly by intent, for these sharp juxtapositions of dark and light, wet and dry, angular and cuvilinear, and solid and void are not to be found in the three-dimensional realm of reality and are possible only on the flat surface of a painting. The controlled and elegant strokes identify the artist as a calligrapher, while the manipulation of positive and negative space fall within the province of the seal-carver. Most interesting from a painterly point of view are the areas in which colors are puddled and mixed on the surface, or where dark ink is dropped onto wet areas and allowed to suffuse outward, naturally and spontaneously. The great visual richness of this approach is what is referred to by the writer of the colophon to these leaves as ‘flower paintings with a scholarly air.’

Wu Hsi-tsai was named Wu T’ing-yang at birth, with tzu of Hsi-tsai; at the age of fifty sui, in 1849, he adopted Hsi-tsai as his name and took Jang-chih as his tzu. Born in the Kiangsu city of l-cheng, Wu earned the chu-sheng or lowest-level degree and became known for the breadth of his learning and the high quality of his poetry.

However, it was for his skill in calligraphy and, especially, seal-carving that Wu Hsi-tsai became famous; in both areas he was strongly influenced by the emminent scholar Pao Shih-ch’en (1775-1855), with whom Wu studied as a live-in disciple. Pao was a highly skilled calligrapher but was yet more renowned as a critic of calligraphy, especially his studies of ancient writing based on inscriptions carved in stone. In opposition to the then-popular kuan-ko or ‘ministerial’ style, Pao and others advocated a more antique style that was derived from ancient types of calligraphy found engraved on northern stelae. A natural extension of this interest in archaic forms of script led Wu Hsi-tsai into seal-carving, and it was there that he made his most individual contributions, as an adherent of the Wan or Anhui school of seal carving founded by Teng Shih-ju (1743-1805).

Wu is said to have turned to painting relatively late in life. In an inscription written when he was sixty years of age, Wu recalled having studied with the Yangchou master Cheng Ch’i (1809-1879) ten years earlier-at the same time, that is, that he changed his name from T’ing-yang to Hsi-tsai. Although a very few extant paintings show that Wu had begun painting earlier, most of his paintings do in fact date to after 1849, when he used a seal reading Wan-hsueh Chu-shih, ‘The Late-blooming Scholar.’ During those years Wu lived at the Ch’ih-yun Villa owned by Master Yao of T’ai-chou and was attended daily by his pupil Wang Yun (1811-1883), author of the Yang-chou Hua-yuan Lu. This stage of his life was described by Wu in a poem:

I have sons and I have grandsons
but am like a widower and they like orphaned children;
I have neither house nor home
and no firewood, rice, oil or salt.

Despite the lack of commercial success suggested by these words, Wu Hsi-tsai occupies an honored position within the genealogy of the Wan school of seal-carving and is recognized today for an innovative style of painting that linked the achievements of Li Shan (1686-ca.1756) with those of Chao Chih-ch’ien (1829-1884) of the following generation of calligrapher-painters.