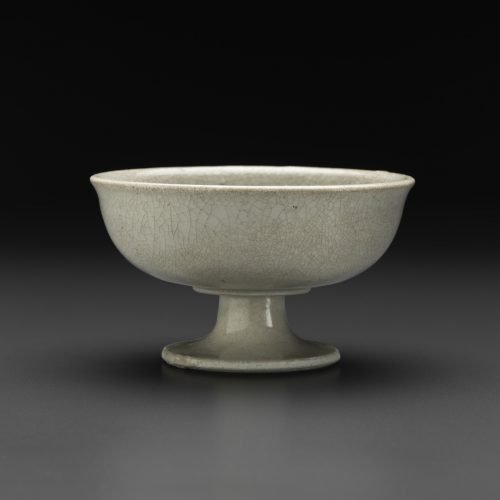 The wide shallow bowl with everted rim is supported on a solid stemmed foot with widely splayed base and is distinguished by a sharply cut step surrounding the base of the bowl. A minutely crazed, clear, colorless glaze covers all but the base where the off-white, hard, dense body is visible.

During the Tang dynasty silver and gold vessels were among the most finely crafted works of their time, the present stemcup an excellent example of the influence of such metalware on ceramic form. A silver stemcup from the Carl Kempe collection was formed with a definitive step at the base of the bowl providing a precedent, or model, for the present rare ceramic type.1 Related ceramics include a cup excavated at the Xing kiln site in Neiqiu in southern Hebei province and another exhibited at the Nezu Museum in Tokyo in the late eighties.2

In tea lore, when the snow-white wares of the Xing kiln are likened to silver, one is led to think of the general similarity in the aesthetics between the two, but in this present cup we see that the association can go even further.