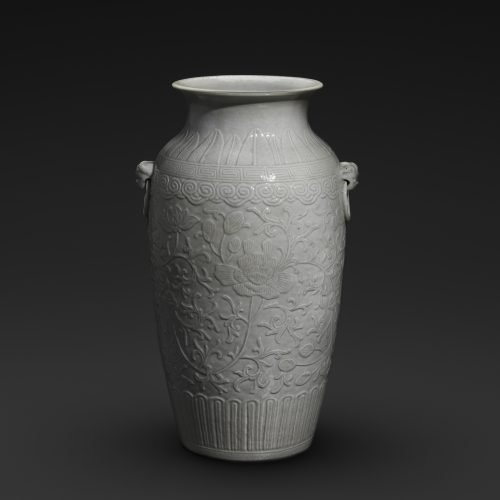 Formerly in the collection of Baron Go 日本郷所蔵

Of elongated ovoid form with incurved neck and flat everted rim, the elegant vase is molded in relief with three large exotic flowers borne on scrolling leafy vines interspersed with further small blooms above lappets around the base. Two mock lion-and-ring handles are applied opposite each other over a ruyi band. A fret border encircles the shoulder beneath leaf tips. The vase is covered with a clear, bright, colorless glaze revealing the pure white porcelain body beneath.

The Japanese were not known to have collected Qing dynasty porcelain to any great extent. However, this vase made its way into an esteemed collection in Japan possibly not long after it was made in the 19th century. As a rule, the Qing aesthetic was not compatible with Japanese taste as it was considered too finicky and perfect, suppressing individual character, warmth, and soul. This view of Qing imperial and closely related porcelain, such as represented by the present vase, is actually understandable. There is indeed a precision, perfection, and an across-the-board predictability in the wares, characteristics that are anathema to Japanese taste. However, it is precisely this that gives the wares status in the Chinese mind. The centuries of technical progress resulted in a Qing period ability in ceramic art to create anything that the potter would want to create. At the same time that these doors were opened, the potters were both blessed and constrained by tradition. For this reason, the present porcelain would seem very familiar to anyone knowledgeable about Chinese art. The vase is a potpourri of designs and motifs derived from precedent ceramics and metal ware streaming back to the Bronze Age. Precedent was a safety net. Whatever originality that was introduced was subtle and within a tried and true context, for example a new twist on a composition or motif or a nuanced shape as we see in the present elegant vessel.