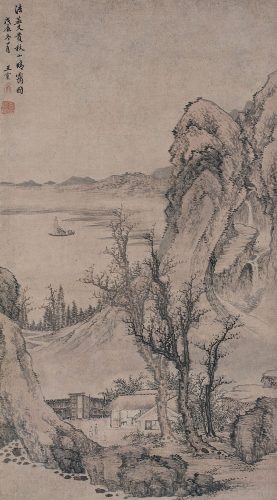 Inscription:
‘Done after Yen Wen-kuei’s ‘Clearing Clouds in Autumn Mountains’ during the tenth month, Winter, of the year 1688, by Wang Yun.’

Artist’s seals:
Chih-k’o Tzu I-yueh (‘I cannot but take pleasure in myself,’ from a poem by T’ao Hung-ching), and one other

Wang Yun (1652-1737 or later) was born in Kao-yu near Yangchou in Kiangsu province, the son of the f lower-and-bird painter Wang Pin. Already by his early twenties Wang Yun was producing independently; in an inscription written for a painting done in the year 1708, Wang noted: ‘In the year 1676 I traveled by boat to Nanking. A friend brought out a copy of a painting by Kuo Hsi and showed to me. Its conceptual flavor was lofty and antique and its understated naturalism was perfect. Each time I copied it, I failed to achieve a resemblance.’ Other early paintings by Wang were based on the style of the 10th century artist Li Ch’eng and the present work was done after Yen Wen-kuei, indicating his early training in styles of painting that required well-honed technical skills.

Probably by the year 1687, and no later than 1691, Wang Yun was in Peking, where he had gone to take up court service offered on the recommendation of Sung Lo (1634-1713), an important collector and patron of artists such as Weng Hui (1732-1717) as well as a high government official and confidant of the K’ang- hsi emperor. The exact nature of Wang Yun’s court duties is unknown, but since only two of his paintings are recorded as having been in the imperial collection—and neither of them bears any sign of having been painted directly for the court— it is most likely that he contributed in some way to the sumptuous decoration of the court halls, which were customarily graced by wall paintings as well as painted decoration on the pillars and furniture. Various ‘Buddha pictures’ mentioned by Frederick Hirth as having been signed ‘Wang Yun of the Imperial Household’ suggest another type of painting produced by Wang in his capacity of court painter.

There was of course nothing to prevent Wang from occasionally accepting commissions from private patrons, and of this type of painting there is far more evidence. Wang Yun had earned some reputation before going to court, and the recommendation from Sung Lo would have facilitated his further introduction into wider court circles of artists and patrons. Foremost among the former was Wang Hui, with whom Wang Yun was closely associated during the decade of the 1690s, collaborating frequently with the older master and such of his disciples as Yang Chin, Wu Chih, Ku Fang, Yu Yuan, and Hsu Mei.

In contrast to those joint works, in which Wang Yun played a subordinate role and contributed only secondary pictorial elements, stand his large-scale landscapes of the period based usually on the styles of various Sung masters. The Chiang-tu Hsien Hsu-chih records one example of his skill that earned him particular renown: ‘Prince K’ang (Ch’un-t’ai, 1673-1709, who held that princely title from 1697 until his death) owned a picture of ‘Meritorious Officials’ that he kept in his capital residence. When it was accidentally destroyed in a fire, various famous masters tried to replace it but none of their efforts was satisfactory save that done by Wang Yun. At that time the K’ang-hsi emperor repeatedly offered him official rank but Wang was adamant in his refusal to accept. The emperor thus said to him: ‘You truly are the fool of this court,’ and Wang subsequently used this as his by-name.’ Wang’s new name was Ch’ing-ch’ih, ‘the pure fool of the Ch’ing.’ His ‘foolishness’ in refusing promotion was of course shared by Wang Hui, who around this same time declined appointment to the court academy of painters and continued to work mainly on private commissions.

Wang Yun ‘served at the Imperial Household for seventeen years…when old he requested leave to go home and was escorted on his return. The Prince of K’ang was skilled in making seals and with his own hands carved for Wang a jade seal… bearing the legend ‘calligraphy and painting seal of Chu-li’s (Wang Yun) residence.’ On the side he inscribed: ‘On the first day of the sixth lunar month of the year 1704 of the K’ang-hsi reign-era, carved for presentation to Wang Yun of Chiang-tu (Yangchou) by the Manchu Prince K’ang.’’ If, as seems most likely, this seal was carved on the occasion of Wang Yun’s retirement after seventeen years of court service, he would have arrived in Peking around the year 1687; Wang’s own inscription on paintings suggest that he was in Yangchou no later than the year 1705.

On his return to the south Wang faced stiff competition from other well-established profession artists, including Li Yin and Yuan Chiang. Many painters in this group developed original and eye- catching styles and often also became specialists in order to capture a larger share of the market for paintings of particular subjects or done in special styles or techniques, which included those derived from Western painting. These were used not only to enliven paintings of traditional subjects or with standard compositions but could even form the basis of a recognized specialty in Yangchou: ‘Chang Shu…was well-versed in the methods of Western painting. Near to far corresponded with large and small and down to the smallest detail all accorded with rule. Even a Westerner himself could not best him.’ Wang Yun’s ‘westernizing’ style, which appears within a decade of his return to Yangchou, thus represents at least in part his response to the trends and demands current in Yangchou at that time. Another possibility was to produce works in old styles (fig. 1) at a very high level of technical competence in a style very clearly based on the classic paintings he had seen in Peking.

Wang Yun’s exact date of death is not recorded in standard sources but it may have been as late as 1737, the date of the latest known painting attributed to him. A painting done in 1745 by Ch’eng Ming bears a colophon by Wang Yun, who, if the same person as our painter, would by then have reached the age of ninety-three. Wang Yun’s nephew, Wang Shih, and his great-nephew, Wang K’un (1736-1806), extended the tradition of Wang Pin into the fourth generation, and Wang Yun himself also had a pupil named Chang Wan.