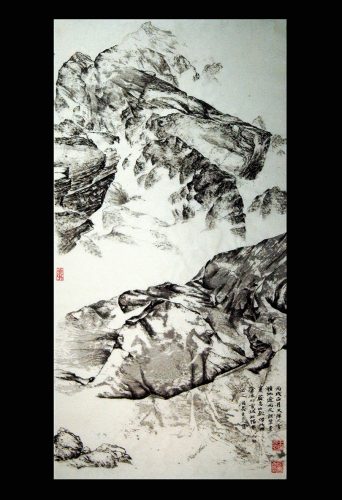 Inscribed: “February 2006 – Heavy snowfall from the skies, over two feet wrapped the earth in silver, a magnificent sight. This inspired me to paint a few pieces of realms of glaciers and snow, and record it. Mansheng at Sanrenju [‘Three-person Home’].”

The cold, hard edge of winter is stunningly captured in this study, a veritable powerhouse of black and white. The broad brushwork, with strokes intersecting in a bold geometric dance, is truly Cezannesque in feeling, while forms are structured in such a way that the final overall image approaches abstraction. The title “Snow Cliff #2,” and an inscription by the artist that conjures a particular storm that inspired the work, the great eastern seaboard snowstorm of February 2006, pull us back into the painter’s two-dimensional world of representation. We are indeed within a landscape of bold rocks and frigid snow, within a memory of one of Nature’s awe-striking events.

Wang Mansheng came from humble beginnings in Taiyuan, Shanxi province where he began a study of Chinese calligraphy and painting—independently and without resources, at the age of seven. He was a young teenager during the Cultural Revolution and took refuge during those years in practicing calligraphy. He entered Fudan University in Shanghai studying classical Chinese literature and old master paintings. After graduation in 1985, he worked as director of cultural programming at China Central Television in Beijing, producing documentaries on the art and culture of China and Tibet. The job took him on location to Tibet where he was profoundly affected by the local Buddhist art he saw there. In 1996 he emigrated to the United States where he began his life as an artist and today lives an immensely creative life in the Hudson River Valley outside of New York City, in a place called home by Mansheng, his wife and their daughter, the “Three-person Home” mentioned in the inscription.