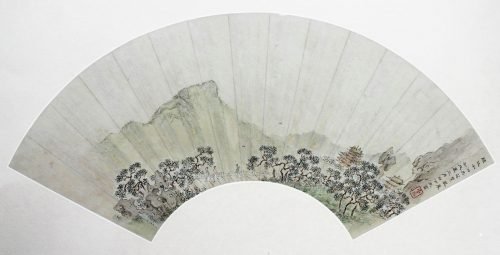 “Orioles and Blossoms in the Wu Garden” 1802
呉苑鸎華圖

Inscription:
“Painted after the handscroll ‘Orioles & Flowers in the Wu Garden’ by Qiu Shizhou (Qiu Ying) during the third lunar month, spring of the year 1802, by Wang Lin from Baixia (Nanjing).”

This charming painting with tiny orange orioles in flight just off center recalls the delicate drawing and lyrical coloring in the works of Qiu Ying (d.1552), the artist mentioned as inspiration in the inscription here. Positioned on a terrace, enclosed by fence and protected by overhanging trees, three figures gaze out over the misty valley expanse spread before them. Large and intricate garden rocks appear to the left, while storied buildings protrude from the trees to the right. We can only imagine what privileged individual owned and used this gracious fan.

Wang Lin, tzu Chunpo, was born in Nanjing, Jiangsu province. Early in life Wang exhibited great talent in poetry, calligraphy, and painting, and while in the capital was employed as secretary by Board Vice-President Liu Fenggao. After passing his civil service examinations, Wang was appointed Salt-receiver for Fujian province. During his term of office, he and Zhu Hai organized a poetry and drinking society that became very well-known. Wang’s evocative landscape paintings were sought after by such individuals of status and privilege as Prince Cheng, which of course increased both his fame as a painter and the number of people seeking his works. His good friend Zhang Wentao (1764-1814) commented that “the style of his household is like that of Wang Wei, the flavor of his painting similar to that of Mi Fu.”