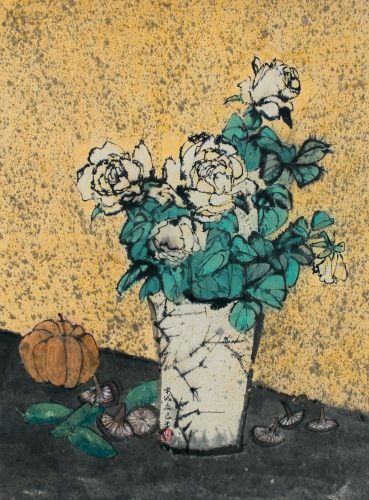 White peonies that bloom in spring, when the snow is melting, are placed in a kuan -style ceramic vase with the so-called cracked-ice pattern. This is placed against a splattered ink background, a style found in the artist’s work well into 1990s. Arranged beside the vase on a shelf are an acorn squash, serrano peppers, and mushrooms—the makings of a dish most appropriate to the end of winter and the beginning of spring, the season during which the painting was created. The aesthetic approach used here bears comparison with the works of Henri Matisse (1869-1954) (fig. 1). Done thirteen years earlier than our painting, Matisse’s work reveals a greater concentration on composition and color while C.C. Wang was far more conscious of brushwork in its own right, major differences in his opinion between Chinese and Western approaches to painting.

Living in Shanghai as a youth, C.C. was able to study the collections of such important connoisseurs as Ku Lin-shih, Wu Hu-fan, and, especially, P’ang Yuan-chi, learning from earlier master works and developing his own style of painting.1 Assisting the very important project that resulted in the Burlington House exhibition of 1937 gave C.C. unprecedented access to paintings from the former Imperial Collection as well as those in private collections throughout China; collaboration with the German scholar Victoria Contag resulted in publication of what became and is still a standard reference work for all collectors and scholars, Seals of Chinese Painters and Collectors of the Ming and Ch’ing Dynasties.

In 1948 C.C. moved with his family to live in the United States, a daunting move but one that seems to have slowed C.C. not at all. Taking courses at the Art Student’s League during the 1950s, he learned firsthand about the modern approaches of Western Art. Preferring the Impressionists, Post-Impressionists and early Cubists, he was wary of Abstract Expressionism and non-objective painting in general. “The first two important things I learned about Western painting are that it is meant to be seen from a distance, so composition is crucial, and that the ‘touch’ of an oil painter is similar to our brushwork, but not exactly the same because of the nature of the materials. Chinese brush and ink are much more sensitive and responsive than oils and canvas, and brushwork is the one aspect that Chinese painters have explored in much great depth than their Western counterparts.”2

Continuing to collect, C.C. took great advantage of the master works coming on the market following the revolution in China of 1949, buying the best available with whatever funds were available to him at the time. As his wife laughingly commented to me decades later about that era, “We had nothing to eat, but we did have Ni Ts’an’s (1301-74) hanging on the wall!”

C.C.’s own painting style continued to evolve as he assimilated new influences and charted a fresh course for literati painting in the New World. During the 1970s he invented a technique in which the dampened paper was first crumpled so as to provide a spontaneously textured surface, then dried and painted. The result is most compelling, with a wonderful pictorial tension obtaining between the surface of the work and what was painted on it. As C.C. himself noted, “I never denied the significance and ultimate beauty of Chinese brushwork, but I realized that there were other areas of painting that Chinese artists had not explored. I de-emphasized brushwork in order to investigate new modes of composition and color.”3

Some part of C.C.’s evolving aesthetic was based on what he saw during his early days in New York, paintings by such contemporaries as Henri Matisse (b. 1869), Mark Rothko (b. 1902), William de Kooning (b. 1904), Barnett Newman (b. 1905), Franz Kline (b. 1910), and Jackson Pollack (b. 1912). In true literati fashion, C.C. studied the achievements of these artists, identified the portions that were of greatest interest to him, mastered those, and then transformed them, as in the present still-life, into paintings that are readily recognizable as his own creation.