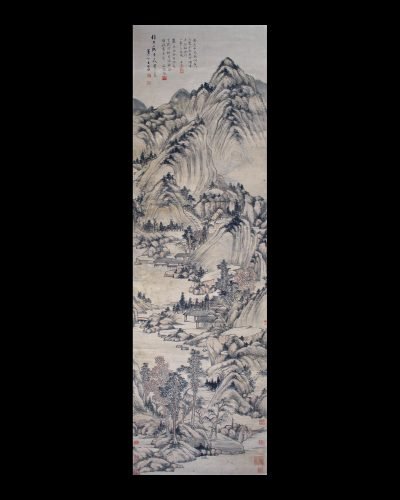 Wang Chen (1720-97), called Pengxin and other names, was born in Taicang, Jiangsu province. A sixth-generation descendant of Wang Shimin (1592-1680), Wang Chen was the great-grandson of Wang Yuanqi (1642-1715). After having passed the juren degree in 1760, Wang first served on the support staff of the Grand Secretariat and some years later as sub-prefect of I’chang in Hubei Province. In 1782 he was promoted to prefect of Yongzhou in Hunan, his highest position before he retired in 1780. Wang lived out his life as the guest of Bi Yuan (1730-1797), the governor of Huguang and an important collector and patron of artists.

Bi Yuan commented on his friend: “The disciples of Taiyuan (Wang Yuanqi) could all move the brush and make landscapes but the Prefect (Wang Chen) was outstanding among them”1 Part of the esteem in which Wang was held by his contemporaries was based on admiration for his character, which is suggested by the following anecdote. “…When the Prefect was in the capital there was a menial servant named Chen Guei who was extremely poor. He had only a single blanket, so at night, being very filial, he would cover his mother with it and then sleep in his clothes. The Prefect took pity on him and did a small landscape for him inscribing it (with a poem and the statement). When this painting is hung in the marketplace, there will surely be some good fellow who will exchange a quilt for it.”2

Wang Chen’s family heritage naturally played an important part in his artistic upbringing and this was strengthened by his study with Dong Bangda (1699-1769), a direct pupil of his illustrious great-grandfather. Wang Chen was eventually grouped with Wang Yu, Wang Su, and Wang Jiu—three other descendants of the Four Wangs of the early Qing—as the Four Lessor Wangs. Wang Chen’s reputation was further enhanced by his major book on the history of painting, the Huilu facai.