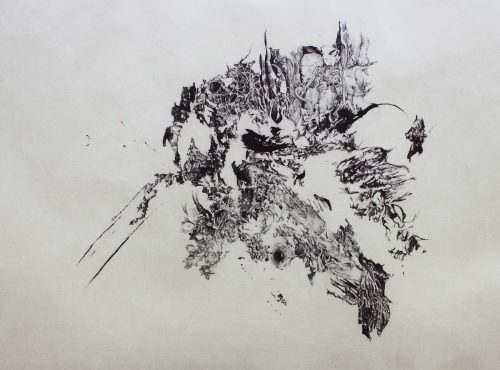 Wai Pong-yu was born on Hainan Island in 1982. When he was two-years old, he moved with his family to Hong Kong. He attended Hong Kong University where he received a BA degree from the Fine Arts Department in 2006. His talents were recognized by awards he was granted at the time of his graduation. By the following year, Wai could call himself a professional artist as private and public collections began to acquire his works. By 2011 he had embarked on the series “Moments of Truth-Synergy of Ink” and is continually adding to this mesmerizing work. With ballpoint pen as his magic wand, he writes images in ink that appear like metal filings drawn to a special magnet but are read as rocks, as landscapes. while yet hovering closely on the border of abstraction, a border that traditional artists in China never cross. And neither does Wai Pong-yu.