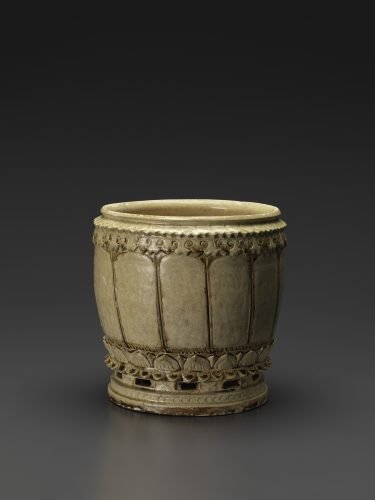 Heavily potted and of barrel shape, the jar is raised on an elaborate openwork pedestal style base. The body is divided into twelve upright lotus-petal lappets defined by deep grooves, the petals outlined with iron pigment. A collar of multiple lotus petals above ruyi motifs is casually dabbed in brown. A circle of carved upright petals cushion the vessel above the high foot in imitation of a wooden stand. The ivory glaze is glossy, glassy, crazed and crackled throughout and covers the off-white stoneware body that burnt a buff color in firing where exposed.

Independence from the Chinese, who held sway in Vietnam for around a thousand years until the 10th century, was more than military freedom. The new Vietnamese dynasty, the Ly (A.D. 1009-1225), emerged from Chinese domination to initiate a period of cultural independence and fluorescence expressed on one level by the art of the potter. Lessons learned during centuries past due to the migration of ceramic-producing techniques and decorative modes into Vietnam continued to serve artists in their newest endeavors, represented by the present stoneware vessel. These influences include the technology for producing high-fired ceramics from China, for example, and decorative modes from Buddhist India and neighbors closer to home in Southeast Asia. This well-known form has been discovered not only in the Thanh Hoa region, the southernmost limit of Chinese incursion, where such urns were originally excavated, but had more widespread production and distribution as well. These distinctive urns are consummate expressions of an independent form and aesthetic, which resulted from the seamless marriage of migratory techniques and styles with native creative impulses.