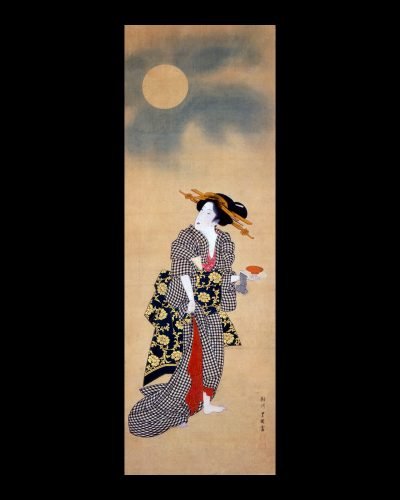 A barefoot geisha, her right hand holding up the hem of her lovely kimono for easier movement, moves rapidly in the moonlight, looking back in seeming apprehension. The pick of her shamisen lute is tucked into her obi sash, and in her left hand she holds a sake cup and a hako-seko, a small decorative purse with elaborate tassel. The lack of shoes, and the fact that she is not carrying her musical instrument, suggest that this lady of the night is silently fleeing a troublesome client.

Much attention was paid to the different textiles of the lady’s dress, to the varying patterns, colors, and textures of the under-and over-garments. Most striking is the use of gofun or lead-white to create a three-dimensional base for the gold-painted peony pattern of the blue garment.

Born the son of a maker of puppets, Toyokuni lived and worked in Edo. Trained early by the ukiyo-e painter Utagawa Toyokaru (1735-1814), Toyokuni then studied and was influenced by virtually all the contemporaneous print artists but he was still able to create his own distinctive style, which featured the private lives of actors as well as their roles on stage. Toyokuni was eventually considered best of the Utagawa school, making his reputation by superb drawing and flawless design, precisely what are to be seen in the present painting.