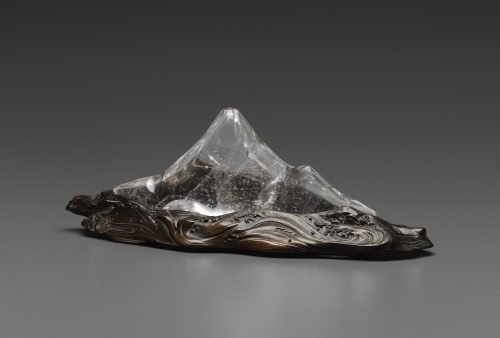 The transparent, colorless stone is carved in the form of a mountain with a Fuji-like volcanic peak and a smaller mountain rising to one side. The stone is shot through with ice-like inclusions and crystalline flecks and the surface polished to a smooth texture overall. The range is intended to be viewed from one side and fits into a dark hardwood stand raised on four short feet. The stand is finely carved in front with swirling and cresting waves. The reverse is carved with calmer seas and bamboo-like leaves afloat on the extremities.

This engaging object, fashioned to grace a scholar’s desk, stands in contrast to the crystal carvings of Chinese craftsmen. Objects of similar size and shape produced in China were invariably fashioned as brushrests and carved with representational images. The Chinese considered the stone as a vehicle for creating a functional implement and artistically as representing images usually with no connection to the material itself. One focuses on and appreciates the image rather than or as much as the material. Here, however, we are drawn across the smooth surface of the stone and beyond into its luminous heart.