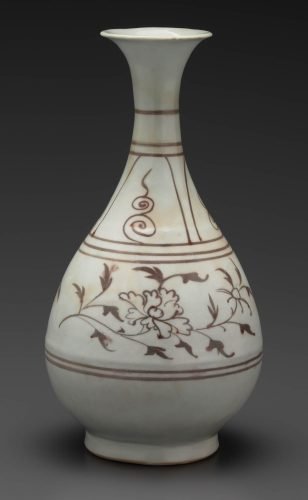 The sensuous vessel has a pear-shaped body supported on a ring foot and a narrow neck which gracefully flares to the out-turned mouth. The body is divided horizontally into two registers of copper-red decoration, all divided by double-line and triple-line borders. Two detached floral sprigs are swiftly painted in a linear, calligraphic style above the widest part of the vessel, one a peony, the other a chrysanthemum, both with trefoil leaves issuing from slender stems. The triangular leaf-shaped panels infilled with scrolls ascend from the triple band and reach toward the neck. Overall the white glaze is of a slight greenish tint while the copper red is of even cranberry color. The body of the porcelain is burnt pink, visible on the unglazed, deeply recessed foot enclosing the base which is also slathered with the off-white glaze.

The present piece is extremely well-potted but at the same time swiftly painted, revealing the commercial call that echoed throughout Jingdezhen during its time of production during the Yuan period. The present bottle was likely among those shipped southward to the Philippines and Southeast Asia and was in fact acquired many decades ago in Singapore. A similar pear-shaped vase is not too surprisingly on view in the Fort Jesus Museum in the coastal city of Mombasa in Kenya on the east coast of Africa, since the world reached by Chinese porcelains during the Yuan dynasty was a very wide one.1 A variety of designs, some like the present and others more complex, is encountered on bottles that remained in China and have in recent times been discovered in historical contexts from Jiangxi to Beijing, Shandong, and Inner Mongolia. A good number of museums around the world count such vessels in their colletions.2

2. For example, see one in the Birmingham Museum of Art in Handbook of the Oriental Collection, Birmingham, 1988, pl. 22, p. 71 and another in Metropolitan Museum of Art, New York in Suzanne G. Valenstein, A Handbook of Chinese Ceramics, New York, 1989, p. 135.