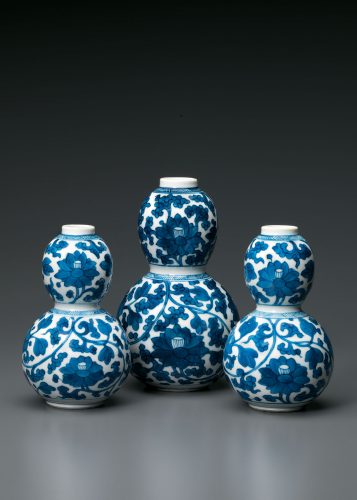 The three bottles are similarly shaped in the forms of gourds with spherical lower lobes and elongated ovoid upper lobes, the lobes joined at waists that are short and wide, each vessel surmounted by a low upright neck with rounded lip rim. The vessels are supported on short feet, the wide circular foot rims encircling countersunk bases similar in appearance to jade bi disks. These foot rims are unglazed and reveal the white porcelain bodies, while the glazes on the recessed bases exhibit some crawling and minor flaws. Each of the bottles is painted in vivid cobalt blue with dark outlines and intense blue washes, the largest bottle with a dense pattern of scrolling lotus vines, four equally spaced large blooms on the lower bulb and two on the upper bulb, all borne on stems with foliate, multi-lobed leaves along with simpler trefoil leaves issuing from the stems. The pair of smaller bottles is decorated with a similar pattern but with trefoil leaves dominating and with somewhat less dense patterns. All three vessels sport herringbone bands that form narrow borders surmounting the decorative zones, while simple line borders enclose the decor from below.

The gourd was used as a model for ceramic shapes already during the Neolithic period in China and continued to inspire potters ever after. The form, consisting of a large lower and smaller upper lobe, was most suitable for storing, pouring, and even drinking libations, providing voluminous interior capacity while at the same time the constricted waist between the two lobes offered a convenient way to grasp or suspend the vessel. The intriguing naturalistic form was an inspiration for ceramic production throughout Chinese history in north and south alike. Aside from its utilitarian function, the significance of the gourd in Chinese culture might well be related to its prominence in fertility cult paraphernalia and practices. The presence of images of fish and frogs on the earliest ceramic wares fashioned in this distinctive shape suggests also a connection with the fruits of China’s bounteous waterways.
The gourd continued to be produced in ceramics throughout time, its naturalism relevant especially to a Song aesthetic while its Daoist associations were meaningful throughout later Chinese ceramic histor y. Gourds were used by Daoist practitioners for the collection, storage and imbibing of the elixir of immortality and the belief in the efficacy and magic of gourds is well established in Chinese myth and legend. The form undergoes transformation over time and the present type with spherical lower lobes and egg-shaped uppers lobes with inordinately wide waists and short upright necks is associated with porcelains produced during the Kangxi reign era (1662-1722) of the Qing dynasty.1

Almost identical vessels in Cheshire’s Lady Lever Art Gallery were illustrated by Hobson and although they are of slightly different sizes than the three here, they are otherwise the same in form and decor.2 The vessels share lotus scroll designs which are up-to-date versions of a venerable motif. The lotus blossoms are large and while full and three-dimensional, they are more diagrammatic than painterly, with the pistils geometric and schematic in concept and presentation.3 The leaves issuing from the broadly scrolling stems on the lower lobes and from the shorter stems and borders above are predominantly ornate trefoils. The diaper designs relate to the rendering of the pistils in the precise linear geometry of their designs while the outline and wash executed in a bright, intense blue is reminiscent of mid-16th century underglaze-blue decorated porcelains p roduced under t h e Mi ng-dynasty’s Jiajing emperor (r. 1522-1566), under whose influence, in fact, Daoist motifs and forms, such as the gourd, became mainstays in the decorative arts.

*Myron S. Falk was the father of Myron “Johnny” Falk who was well-known and loved, along with his wife Pauline, by more than one generation of scholars and collectors of Chinese ceramics in the West. The Chinese porcelains Myron S. had collected on business trips to China and which were on view at the family home in New York provided the springboard for Johnny’s interest and we assume the present vessels played some part in this.

3. Such ornate lotus scrolls filling the surfaces of white porcelain vessels are not uncommon in the Kangxi period. While variety exists among these, a close associate of the present is illustrated in Chinese Blue & White Porcelain from the Pullan Collection, Spink, London, 1998, no. 47, p. 38.