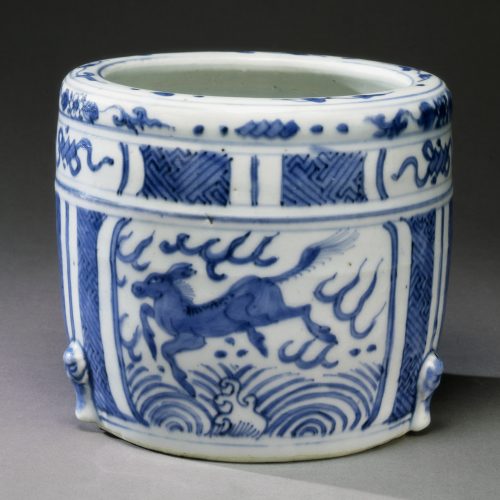 A cylindrical vessel, the straight sides rise from a flat base and terminate in a sharply in-turned, flattened mouth rim. The underglaze-blue design is organized in rectangular panels, three large ones on the main body of the vessel appearing like windows, each opening to a scene of an energetic horse prancing as if in flight over formalized waves and among ribbony clouds. The panels are separated by diaper decorated column-like vertical bands while the wide horizontal belt beneath the mouth displays elongated oval panels containing ribbony motifs alternating with pairs of diaper decorated rectangles all below a narrow mouth band filled with abstract floral and small geometric motifs. The mock cabriole legs are applied between the major panels above the base of the vessel. The deep blue is applied in smooth washes and broad brush strokes under a clear, bright, smooth glaze, the unglazed base revealing the white porcelain body.

The shape here is based ultimately on the bronze lian (or zun), a cylindrical container raised on three short feet, that was popular during the Han period. Contemporaneously the form was taken up by ceramicists who continued to produce the shape in all manner of wares over many centuries. Sancai examples from the Tang and white porcelanous pieces from the Tang and Song are known to have been produced but it was particularly the celadons from the Song and Yuan that struck a chord at home and abroad, especially in Japan, and during the Ming period the form was also produced in a variety of wares, including porcelain as in the example here.

It appears that a good number of this vessel type were produced especially during the 17th century and usually lifted on short legs, whereas here the legs are incorporated into the body. A common feature is the decorative band beneath the mouth and above the main decorative zone, consisting of truncated arch-shaped panels and rectangular fields of dense diaper patterns. While their use as incense burners is clear from the reticulated metal lids that sometimes accompany such vessels, those fitted with lacquer covers in Japan suggest their use as water containers during tea ceremony activities.1