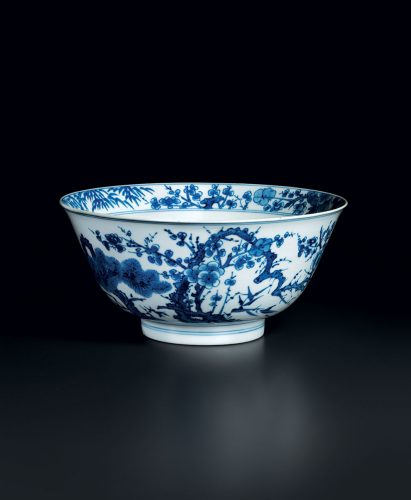 Thinly potted, the bowl is of deep form, its gently rounded walls rising to a slightly flared rim and the bowl supported on a high ring foot surrounding the recessed base. The decoration on the exterior is masterfully painted in a bright cobalt blue with a gnarled pine tree, bending stalks of bamboo, and a prunus tree bursting with buds and blossoms. The composition is framed above by a pair of thin lines encircling the bowl below the lip, and another pair circling the foot. Of special interest is the asymmetry of the composition with the pine and prunus growing in close proximity to each other on one side of the bowl flanked by lingzhi fungus and rockwork while the bamboo is more isolated among rockwork on the opposite side, the stalks bending as if in the wind and rising almost to the top of the bowl, with clusters of bamboo leaves tumbling into view from above. A border beneath the rim on the interior is filled with alternating branches of pine and prunus and stalks of bamboo, unfolding as if the scene were a narrow handscroll with images cropped at top and bottom revealing but a slice of nature, all framed by a double blue-line border below and another above. Enclosed within a single blue line at the bottom of the bowl, a circular panel contains the “Three Friends” displayed as a dense overgrown thicket, the giant prunus blossoms jostling with the gnarled pine for position with the bamboo peeking from behind. The reign mark Da Qing Kangxi nianzhi, “made during the Kangxi era of the great Qing (dynasty),” is written in large underglaze-blue characters within a double circle on the base.

The motif referred to as the “Three Friends of Winter” (suihan sanyou) was emblematic of the perseverance of the scholar gentleman under adversity. Each “friend” possesses a special quality. In winter the steadfast pine flourishes; the flexible bamboo can withstand the cold winds; and the prunus is the first to blossom —a harbinger of spring. Perhaps the first grouping of the three was made by the ninth-century poet Zhu Qingyu who wrote of the “cool beauty, cold fragrance, and spotless purity” in a poem on the prunus blossom (mei) and “Bringing his poem to closure, he joins mei to pine and bamboo: noble plants that are seen to share mei’s ability to withstand the hardship of winter.”[1] During the Yuan period the “Three Friends” came to represent strength and steadfastness especially against the Mongolconquerors and it was also at this time that the motif came to the fore in the decoration of porcelain.

This appearance of the “Three Friends” in the world of ceramics corresponded with the first florescence of “blue-and-white” porcelain, that is, during the Yuan dynasty in the 14th century represented here by a bowl in the Topkapi Saray on which the “Three Friends” are presented in a naturalistic fashion and executed in a “painterly” technique (fig. 1). As in the case of the motifs on the late Ming underglaze-blue decorated jar in catalogue 60, motifs that were deeply meaningful to the Chinese would have been thought of simply as gorgeous designs in the Middle East, the major market for Chinese porcelains at that time. A more formal approach to the design was codified during the early Ming dynasty (figs. 2-3).The palace wares produced under the Xuande and Chenghua emperors during the 15th century were forever after considered the “classic” wares in the world of porcelain, and the “Three Friends” motif would then have been associated with the Confucian gentleman, no longer a dissident or rebel. The lovely bowl from the Percival David collection also produced under the Xuande emperor retains much of the naturalism of the Yuan predecessors and was perhaps the style that inspired the creation of the present bowl (fig. 4). Interestingly, the penchant of Chenghua-period ceramic decorators for creating designs by use of outlines filled with delicate washes appears also to have had some influence on the Kangxi piece here.

A number of inventive compositions were devised for displaying the “Three Friends” during the Ming period. For example, on both the upright exterior wall and the lid of a cricket jar (fig.5) –actually used to house the insects–the branches and stalks of the three plants are interwoven with one another in a lively, dynamic and quite naturalistic manner in contrast to the design on a contemporaneous dish in which the pine, plum, and bamboo are pulled together as if in a giant bouquet, static and unnaturalistic yet at the same time extremely attractive (fig. 6). During the Jiajing period in the 16th century, the emperor’s preoccupation with attaining immortality, or at least great longevity, is reflected in the decorative arts. In a dish here the pine and plum trees and a clump of bamboo fill the interior walls of the dish but the design is dominated by the eccentric “growth” of the pine trunk into the form of the character for longevity, shou (fig. 7). The shift in meaning is supported by the cranes flying through the cloud-filled skies of the rim, the cranes, along with the pine itself, harbingers of immortality.

During the first half of the 17th century the Chinese potters at Jingdezhen responded to Japanese taste in the production of underglaze-blue decorated wares known as kosometsuke (see cat. 61). The wares were created to appeal to the taste of the Japanese clients for simplicity, a lack of pretense, and the awkward, resulting in a different approach again to the “Three Friends” motif. In the kosometsuke dish here, the “Three Friends” are applied to the porcelain almost like little individual stickers, carefully spaced out against the airless ground, appearing flat and emblematic, completely unpretentious, but absolutely charming (fig. 8).

A Kangxi-period bowl formerly in the Eddie Chou collection is an intriguing bow to each of the Ming compositions, yet with great subtly of design and faultless execution (fig. 9). The three friends grow together from the same small stretch of earth above the foot of the bowl, interwoven and intermingling, the pine trunk growing in a strong abstract pattern that is reminiscent of the Jiajing dish with the pine branches transformed into a Chinese character. The round starburst groupings of pine needles and the bamboo leaves extending like fingers, were painted in series of repetitive, flattened clusters, reminding us of the kosometuske approach. The present bowl, however, takes as its point of departure the classic Xuande/Chenghua idiom and yet its physical and technical characteristics are entirely of its own time.

Blue-and-white porcelain dating to the Kangxi period is unmistakable. Whereas the color of the blue on wares of the Ming dynasty ranges from the heaped-and-piled dark blue-black of the late14th and early 15th century to the sublime silvery blue of the late 15th century to the violet and inky blues of the 16th and early 17th and the more timid grey-blues that were also current during the late Ming, the Kangxi palette consists of a bright clear blue and the pristine white of the ground. The contrast between the two colors is stunning, some would say at its best in the history of blue-and-white porcelains. By the Qianlong period the crispness and purity fade along with the disappearance of the restraint in compositional design that characterizes Kangxi wares, designs notably without intrusive or overworked border designs. The style of painting is exuberant and has been noted to relate in some respects to the paintings of the late Ming artist Chen Hongshou.[2] The brushwork here captures in cobalt the essence of bursting buds on spiky branches, the texture of furry pine needles on old trunks and languorous bending bamboo in a composition that has its own twists and turns. While the dish has a Kangxi mark written on its base, the style of writing, with its oversized and “fluid” characters, is not consistent with inscriptions on pieces destined for imperial use. Intended for the wider world outside the palace walls, freedom from imperial requisites and restraints appear to be reflected in this somewhat idiosyncratic, if not unique, composition. 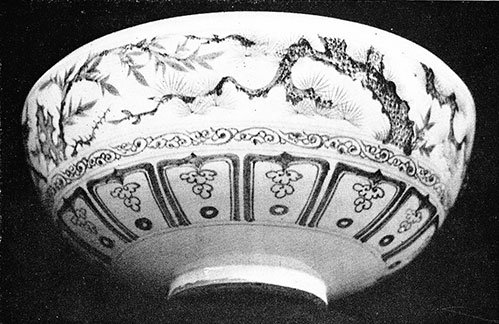 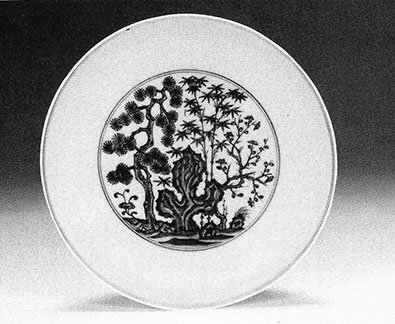 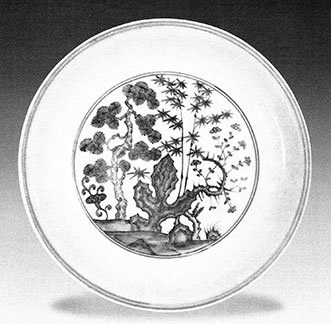 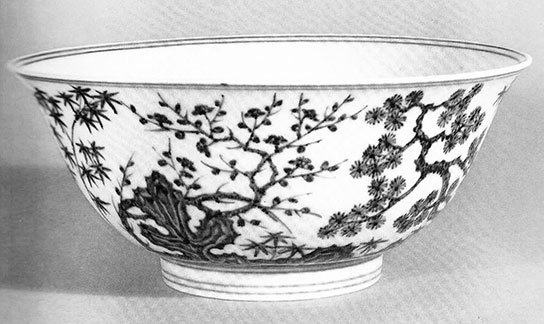 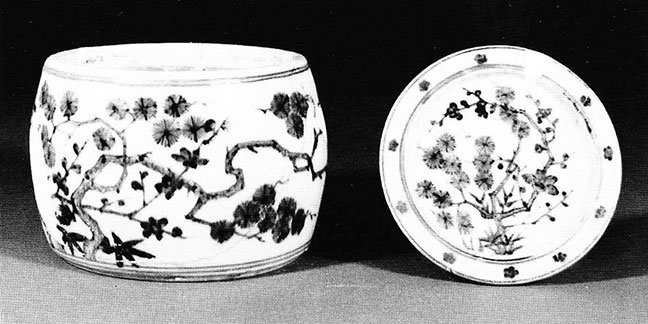 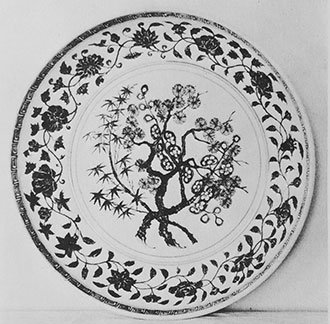 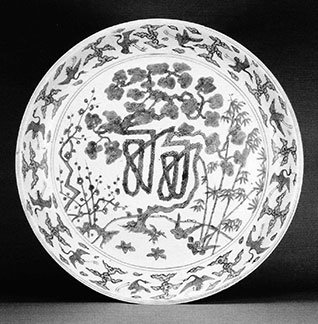 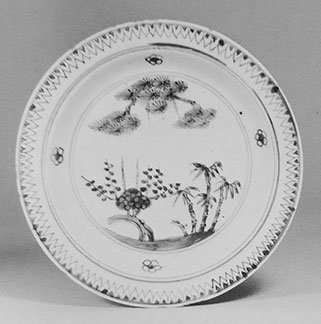 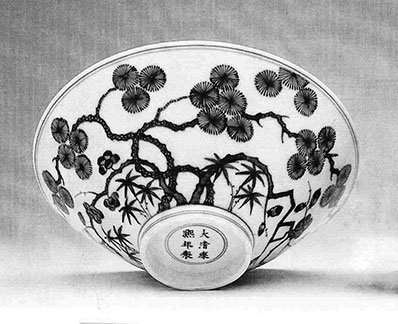