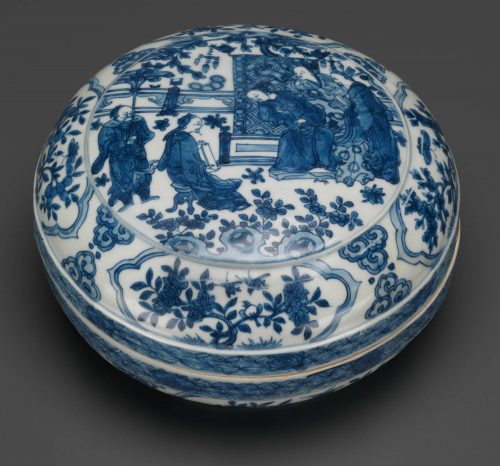 Of cushion shape, the rounded box is decorated with underglaze-cobalt blue, the cover with a raised medallion containing an elaborate garden where two dignitaries and a servant stand in front of a decorative screen addressing a seated figure holding a scroll, a standard bearer behind him. The balustraded garden is bordered in the foreground with pierced rockwork and flowering plants. Detached flowers and weedy patches are scattered on the ground with ribbony clouds swirling above. Surrounding the main decoration are four flower and fruit sprays with hovering insects and butterflies, each enclosed by a quatrefoil, the quatrefoils separated from each other by cloud-like ruyi forms. Matching panels are painted below on the box. Floret-diaper bands with well-spaced emblems, all with a wash of blue wiped over them, border the rims of the box and cover. An overlapping scroll band, also in blue wash, decorates the exterior of the foot which encloses a double ring with a six-character Wanli mark, Da Ming Wanli nianzhi, written in underglaze blue on the base. The painting is executed in an outline-and-wash style with dark vibrant blue for the robes of four of the figures and lighter blue on the fourth. Lighter and darker washes are applied carefully within the outlines of the design throughout with the exception of the diaper bands which are more quickly and casually rendered.

The present box appears to have been produced relatively early in the Wanli period i beginning of the late Ming era, as were a number of other covered boxes that share with the present very similar figural scenes on their covers as well as bird-and-flower and auspicious and geometric filler motifs in secondary zones.1 The later 16th-century phase of the reign naturally exhibited continuity with styles and designs of the late Jiajing reign and the short subsequent reign of the Longqing emperor. These boxes exemplify this connection with the past through the organization of decorative motifs into panels, the use of diaper patterns as fillers, the ruyi “magic mushroom” trefoils, the presence of lucky emblems, the lively nature of the floral designs, and the depiction of human beings in pictorial scenes. At the same time certain stylistic features are noteworthy and are either quite purely “Wanli” in feeling or point to the future.