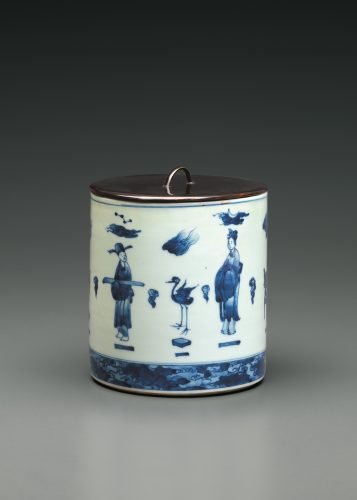 Formerly in a Japanese Collection

This shape of this unusual vessel transforms in front of one’s eyes from a perfectly cylindrical vessel at its base, rising and compressing to an oval-shaped mouth. The piece was photographed with the lacquer lid in place, which was made for its Japanese owner who adapted the jar as a fresh water container, called mizusashi, for tea ceremony use in Japan. If left in China, however, it would have served well as a brushpot, and both the style of painting and the iconographic program would have suited a Chinese literatus to perfection.

Almost every decorative feature of this vessel would be instantly comprehensible to even a slightly educated or “tuned in” member of Chinese society. The high, flat tasseled crown on one of the male figures, for example, is like that depicted in images of the Emperor Yu, “Queller of Floods” and founder of the Xia dynasty, or Huangdi, the Yellow Emperor, culture heroes passing between the worlds of myth and reality. The tripod vessel behind this figure is meant to be a bronze ding, but rather than the usual ceremonial vessel we are accustomed to, it might well represent the nine tripods cast by Yu upon the establishment of the Xia, to symbolize power and authority as well as the nine provinces of his domain. The symbol on the tripod is pronounced wan and denotes the myriad things of creation but is also a Buddhist mystic symbol embodying good fortune and virtue. The crane and tortoise flanking the female character are both symbols of longevity and immortality. Their female companion must be Xiwangmu, Queen Mother of the West, promising immortality through ingestion of the magical peaches from her garden. The scholarly figure is carrying a qin, a stringed musical instrument favored by the elite in China and while he looks back at the crane, he is in reality communing with a deceased friend; cranes are believed to house the spirits of departed allies. An attendant is carrying another qin. The image of the moon above the female and the sun above one of the male figures represent the yin and yang of the cosmos, while single lines or bars beneath each of the eight elements of the design suggest the eight trigrams of the Yijing, the “Book of Changes.”

An important feature of the brushpot is the style of painting, which is restrained and quite carefully executed with outlines rather meticulously infilled with subtly gradated tones of blue, especially effective in the clothing of the figures. The use of this technique in porcelain painting likely relates to an innovation in the world of printing in China, when gradated colors were introduced in the production of pictorial images. The Shizhuzhai shuhuapu, “The Ten Bamboo Studio Collection of Painting,” which exhibits the earliest occurrence of this technique, was originally printed in 1633 and had great influence on Chinese pictorial arts thereafter.