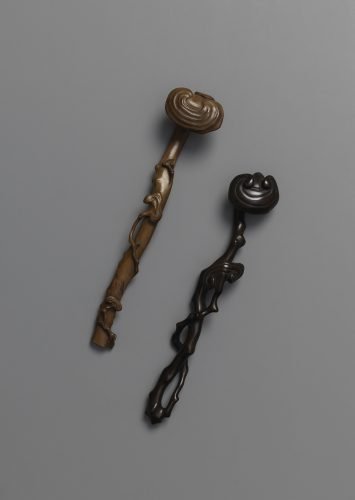 Ruyi, “as you wish,” is the name given to motifs or objects fashioned in the form of the lingzhi fungus head. The ruyi scepters here are in the form of the characteristic fungus head, actually multiple heads, supported on stalks. The scepters can look quite naturalistic, as in the present examples, and range from the simpler to the more ornate and are made in such other materials as jade, cloisonné, and ivory.

Such articles were a good thing to possess. In popular belief the fungus was a source of longevity or even immortality when ingested. The “wish-granting” scepters were the property of Chinese scholars and officials, as well as Buddhist and Daoist clerics. They might symbolize power, status, or, in the hands of a Daoist, detachment. They were reassuring collectables of the scholarly elite for display on desks or writing tables, for use or distraction, with the belief they would bring at least a modicum of good luck to their owners.

One scepter here is boxwood and carved with a relatively straight shaft with three small ruyi sprigs carved and undercut along the softly gnarled stem. A fourth ruyi is sprouting just behind and on top of the large fungus that is realistically rendered with layers of the lingzhi or cloud-like mushroom. The warm golden wood has a satin surface and is lightweight. The other scepter is heavier and carved from a dark hardwood of deep chocolate color with an elongated ‘S’-curved stem with numerous knots. A single smaller fungus stem, equally knotted, shares the large one’s base and entwines around the handle terminating in the cloud mushroom head below the larger principal fungus head.