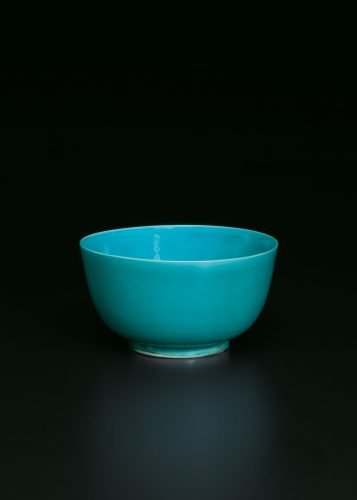 The bowl is of deep form rising from an incurved foot with uniformly thin walls to the upright rim. The bowl is covered inside and out with a brilliant turquoise glaze flashing a bright and glassy surface. The base is covered with a clear colorless glaze with greenish tint and matte surface with some small areas on the rounded foot revealing the pure white biscuit where the glaze has parted.

Copper was a supremely multifunctional colorant for Chinese glazes. A schizophrenic m i ner al, with coaxing from salts, oxides, temperature and timing, the color flips from bright apple green, to blood red, to the amazing turquoise blue we see here. In all cases, a colorful personality emerges.

Alkaline glazes fluxed with potassium and containing copper produced a turquoise color used on and off since the Tang dynasty (A.D. 618-906), centuries after the wide production of the bright copper-greens of the Eastern Han dynasty (A.D. 25-220) mingqi, “spirit objects.” The enchanting peacock-blue color was intriguing enough that it was even produced, albeit on a limited scale, at the Ding kilns in Hebei province during the Song d nasty (A .D. 960-1279), where most major efforts were focussed on the production of their hallmark white wares. During the 13th-14th centuries, slip-decorated Cizhou stonewares produced at kilns in the north might be given a second low-temperature firing after dipping the piece in a glaze-batch with copper added and the piece emerging from the kiln with a turquoise glaze. And in the south the Jingdezhen porcelain center in Jiangxi province produced turquoise glazes to some extent during the 14th-15th century in the early Ming period (A.D. 1368-1644). However, the greatest effort and advances in colorful monochrome glaze production occurred during the Qing dynasty (A.D. 1644-1911). An impressive multitude of monochrome glazes was developed ranging from shocking pinks to creamy coffee browns, from tart lemon yellows to shimmering lime greens, from blacks like licorice to deep blues like the midnight sky, and to turquoise blues the color of gems or icy ocean water or the plumage of a regal peacock, such as that we see here.

The vast material culture of China’s last dynasty becomes almost impenetrable, especially when trying to put a small turquoise-glazed bowl in just the right place within its crowded realm. Luckily, we don’t really have to. We can simply set it on a shelf and let it dominate a room with its vivid eye-catching color and its refreshing brilliance.