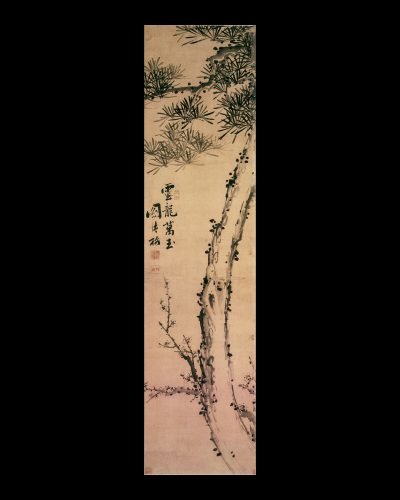 The trunk of a pine tree enters the picture frame in the lower right, bends upward to the upper right where it exits, leaving a branch with needles to fill the upper part of the picture. The lower portion of the trunk is crossed by a branch of blossoming plum, entering from the right and extending upward to just before the inscription. Clearly the “dragon in clouds” of the inscription refers to the pine, just as the “myriad of jades” describes the blossoms of the plum. The combination of these two very auspicious themes suggests longevity as well as fortitude, making the work a very welcome gift for any collector.

Tuqing’ge was a Manchu, born in Beijing, the youngest son of the Minister of Justice. Following his father into the imperial bureaucracy, Tuqing’ge served as Prefect of Tongzhou in Shanxi province. About this time, probably in the 1740s, the Yangzhou master Zheng Xie (1693-1765) was serving as Magistrate in Fanxian, Shandong province and became a friend of the Manchu prince Yunxi (d.1758). Tuqing’ge had probably met Zheng in Beijing in 1736 and during the 1740s he became a close friend of Zheng, who did a painting for him and mentioned him often in his poetry collection. It may have been under the influence of Zheng that Tuqing’ge moved to live in Yangzhou, residing in the Mushan area of the city and thus adopting the name OId Man of Mushan.

Although the birth and death-dates of Tuqing’ge are not recorded in standard sources he was probably born around the year 1680 or so, within the lifetime of Yuanji (1642-1707), one of his models according to Zheng Xie; one painting by Tuqing’ge bears the date 1714. Tuqing’ge is recorded as having died at the age of 82 or about the year 1772.