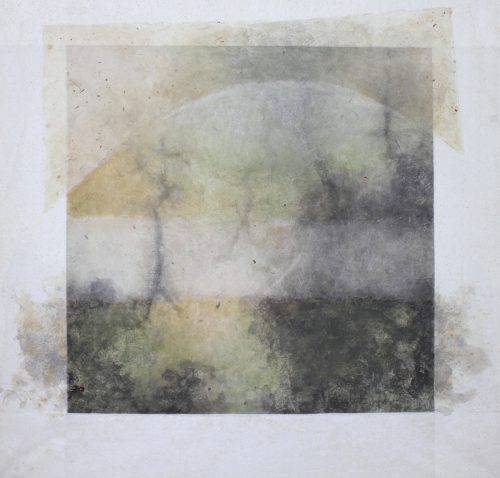 The term the artist coined to describe the innovative and idiosyncratic technique evinced in the present work is dsui hua, or dsui painting. The literal meaning of dsui is to connect or to patch, referring to collage-like constructs combining handmade papers, tapa cloth from the Hawaiian tradition, metallic foil and pigment. Based originally on natural forms, Betty Ecke moved over time toward greater and greater abstraction. We do not know in the present painting, done in 1993 when the artist was sixty-eight years old, if the partially visible orb that dominates the composition is meant to be a golden hillock, or perhaps a setting sun, or maybe the moon. Each would provide environment for the crickets identified in the title of the work, Anthem of the Crickets, where their sound fills the summer and fall in the wild or in captivity, confined to small ceramic, bamboo or gourd cages, performing all soloists, or with many cages lined up together, an orchestra of nature’s music.

Born in Beijing in 1925, Betty had a privileged upbringing, studying painting from an early age with an imperial prince and continuing at universities in Shanghai and Beijing as a student of Chinese classical poetry and art history. She settled in Hawaii with her husband, Gustav Ecke, a distinguished scholar and collector of Chinese furniture, in 1949, and after his death in 1971, she earned a doctorate from the Fine Arts Institute at New York University. This led to a career in writing and teaching until her retirement from the University of Hawaii in 1986, when she was then able to devote her time more fully to her art. In 1990 Betty was recognized as a “Living Treasure of Hawai’i,” an honor bestowed upon her through the Society of Asian Art. In her later years Betty moved to China where she passed away in 2017.

As an artist, Betty has had one-woman shows in major centers including Beijing, London, and at Kaikodo in New York City. Over time she developed her own distinctive and ever-experimental style of painting, which was discussed at length in the Kaikodo Journal XVI (May 2000), “By Design: The Art of Tseng Yuho.” We will forever remember Betty’s graciousness at the grand opening of the exhibition at Kaikodo’s 64th Street gallery, attended by a multitude of guests and well-wishers. It was a late spring evening that felt like the heart of summer, the heat and humidity were so intense. This was one night when air-conditioning was essential but by some stroke of very bad luck, the system broke down completely just as we were opening. We sat Betty, in her Chinese finery and she in good humor despite the breakdown, in a chair near the entry. It became more of a throne as she received guest after guest with sweat pouring down every face. I had rushed across Lexington Avenue to a little shop where I was able to purchase a long-handled bamboo fan, and I stood next to Betty, fanning her, and whomever was lucky enough to catch some of the breeze, for much of the evening. Betty was joyful, regal, gracious, and grateful. This is how we will always remember her.