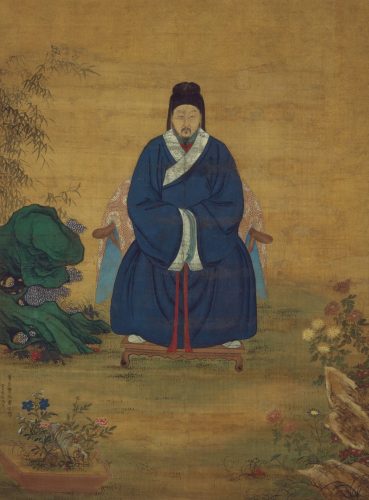 Tseng Ch’ing (1564-1647), tzu P’o-ch’en, was born in P’u-t’ien, Fukien province, but at least from 1607 onward he lived and worked as a painter of portraits in the vicinity of Nanking. [A painting done jointly with the Nanking master Hu Tsung-hsin in 1607 is recorded in Lu Hsin-yuan: Jang-li-kuan Kuo-yen Lu, 1892, chapter 27, p. 17a. Tseng Ch’ing consistently referred to himself as from Fukien, but it should be noted that the T’ung-hsiang Hsien-chih, quoted in the Che-chiang T’ung-chih p. 3253, says that Tseng’s father was from Min or Fukien but later moved to Ch’ing-chen, near Chia-hsing in Chekiang province, where Tseng Ch’ing may thus have been born. In either case, nothing is known at present about the first forty-three years of Tseng’s life. Tseng’s tzu, Po-ch’en, literally means ‘Wave Official’ and was used originally by Chuang-tzu to refer to those in charge of aquatic creatures; it later came to mean a Minister of Yen Wang, Ruler of Purgatory. The meaning it held for Tseng Ch’ing is still unknown.] According to the Wu-tsa-tsu, ‘He used the brush with not the slightest vulgarity. His portraits are as large as two or more feet and as small as several inches, all of them exceedingly lifelike. Relying on his skills he wandered the four quarters, amassing as much as a thousand in gold.’ [Quoted in the very useful booklet on Tseng Ch’ing by Chou Chi-yin: Tseng Ch’ing de Hsiao hsiang Hua, Beijing, 1981, p. 15.] His patrons included some men who served as officials but a majority were members of the burgeoning middle class, some of the best-known artists, famous scholars, and major land-owners of the period. Tseng’s social relations with these patrons thus varied greatly, and it seems that in some contexts he was considered a friend. In most cases, however, he was regarded more as a superb technician, and his various biographers have thus concentrated mainly on description and analysis of his techniques and approach to portrait painting.

According to the Wu-sheng Shih-shih, ‘…His manner and style were cultivated and disciplined, and his moral outlook most admirable. Wherever he went, he would use divination to decide on a dwelling place, which would have an encircling verandah and inner rooms and be placed in an ethereal environment, and everywhere he painted portraits ….'[ Wu-sheng Shih-shih, Hua-shih Ts’ung-shu edition, volume 2, p. 1029.] This account suggests that Tseng travelled a good deal, moving from city to city and town to town, in each of which he would establish a more or less temporary .headquarters where he would meet with clients and work on their portraits.

‘In portraiture there are two schools. In one, strong ink is used for the bones (the linear structure) , and after the ink structure is complete, color is applied, selecting facial coloring on the basis of the age (of the sitter), his spirit already being embodied within the ink structure. This is the school of Tseng P’o-ch’en of Min (Fukien) …. ‘[Chang Keng: Kuo-ch’ao Hua-cheng Lu, Hua-shih Ts-ung-shu edition, volume 3, p. 1286.] An excellent example of this subtle approach is Tseng’s ‘Portrait of Wang Shih-min,’ painted in 1616 when Wang was home in mourning for his wife, hence the Buddhist garb and pose. Wang’s youth–he was then 24 years of age–and his sensitive nature are clearly visible in the facial depiction, manifested mainly by line but also color, while the garment and posture are suggestive of Wang’s position in society. As was noted by the 17th century T’u-hui Pao-chien Hsu-tsuan, ‘… While obtaining spirit via brush and ink, (Tseng) matched this to the drapery patterns, in everything using what was appropriate…'[T’u-hui Pao-chien, Hua-shih Ts’ung-shu edition, volume 2, p. 869.] Some early critics in fact were taken as much by Tseng’s ability to suggest the social and economic status of his patrons as by the miraculous verisimilitude of their faces in his portraits: ‘…Capturing images like a mirror, he wonderously embodied their spirit and emotion. Applying color deeply and richly, his dotted pupils engendered a sense of life. Whether painted on paper or silk, the gaze (of his sitters), their frowns and smiles, are shockingly lifelike …The dignity of carriages and caps (ie., officials), the refinement of hills and valleys (ie., scholarly recluses), the cultivation of the womens’ quarters, and traces of what is transcendant (ie., Buddhists and Taoists) are all transmitted in his drawing. Beauty and ugliness are only in the (outer) appearance, while when face-to-face (with one of his portraits), heart and soul are comprehended and both oneself and the other are forgotten …’ [Wu-sheng shih-shih, op.cit., p. 1029-30.]

The same text goes on to note of Tseng Ch’ ing’ s technique: ‘…To each of his portrait images wash was applied in several tens of layers, and only when he had created a personality did he stop. That he walks alone in the groves of art, influencing everyone both near and far, is not by chance.’ [Ibid.] This description of Tseng’s approach, which accords with that given above, may be contrasted with that of the second school of portraiture mentioned by Chang Keng: ‘…In the second school, light ink is used for the outline and tracing the general position of the Five Sense Organs (ear, eye, nose, mouth, and body), and then everything is washed with opaque color. This is the school method of Kiangnan painters, and Master Tseng was familiar with it…'[Chang Keng, op.cit., p. 1286-87.] Tseng Ch’ing is often held to have been influenced by the Western style of painting known through the efforts of the Jesuit missionary Matteo Ricci (1552-1610), who settled in Nanking in 1599 and opened a church displaying painted and sculpted images in 1605. Oil paintings were done with thickly applied, non-translucent pigments, and the Chinese use of fen-ts’ai washes, to which color and lead-white had been added, were an approximation of that almost three-dimensional and certainly opaque effect. This so-called Kiangnan school style is perhaps best represented today by the numerous low quality anonymous Ch’ing dynasty portraits of equally anonymous ancestors. Tseng Ch’ing’s major innovation, then, was to apply the translucent washes of traditional Chinese portraiture in multiple graded overlays that acted to model faces in terms of light and shadow without obscuring the underlying brushwork that was held to convey character and personality.

Tseng Ch’ing is said to have trained a son and over forty disciples in the art of portraiture and some of these must have assisted him during his later years. According to Chang Tzu-yu, one of these students, ‘…During his late years his eyes were unable to focus on details. For a monk at the Ox-head Temple (in Nanking) he painted a portrait of the eighty-first abbot and then died..'[Quoted in Chou Chi-yin, op.cit., p. 14.] At least by 1624 Tseng had begun to work in cooperation with other artists, who would add appropriate backgrounds to figures painted by Tseng, and by the end of his life we must assume that others were contributing even to the main subjects of the paintings. Tseng’s inscription on ‘Hu Erh-tsao’ of 1624 does not make mention of such assistance but the complexity of the natural environment greater than in any other work done by Tseng alone–suggests that he was in fact aided by someone more experienced than he in painting landscapes.

The same conclusion can be reached about the present ‘Portrait of Huang Tao-chou,’ which was painted when Tseng Ch’ing was about eighty years old and only two or so years before he died. Huang Tao-chou (1585-1646), an important scholar and official, is here portrayed rather formally, wearing his court hat while seated frontally in a large chair with his hands folded symmetrically within his sleeves. The garden setting features chrysanthemums, which were likely intended to call to mind the poet T’ao Ch’ien (365-427), who resigned after only 83 days in office and lived the rest of his days cultivating flowers as well as poetry and music in private life. Tseng’s almost contemporaneous portrait of the sickly Shao Mi (1592?-1652), who eventually sucumbed to a lung disease, uses these same props to suggest a life apart from the world of official cares.

Huang Tao-chou, however, was not in any position to think about cultivating either flowers or his moral character, for at the time this portrait was painted he faced a crisis that would result in the downfall of his dynasty and his execution by the victors. Huang had been an important member of the reformist Tung-lin political party and in 1640 he had been flogged at court and imprisoned before suffering the additional punishment of being banished. Although Huang was invited to return to court in 1642, he declined and began to lecture on philosophy in Fukien, his native province. A portrait of Huang was painted two days before his fifty-nineth birthday, March 7, 1644, by Tseng Ch’ing, presumably while both were in Fukien. Huang here is dressed rather casually, and, seated behind an imposing rock, he seems almost in hiding. On April 25th Peking fell to the rebel Li Tzu-ch’eng, a new court was established in Nanking and the emperor recalled Huang Tao-chou to office, appointing him on October 19, 1644, to the presidency of the Board of Ceremonies. After arriving in the new capital early in 1645, Huang discovered that the newly formed government was under the control of Ma Shih-ying (1591-1646/7) and that his own authority was only nominal; he therefore left the city again on March 19th and thus was not present when Nanking fell to the Ch’ing army on June 19th.

Although the present painting is not dated by inscription, Tseng Ch’ing gives Huang’s official title as shang-shu or Minister, rank 2a in the civil bureaucracy, the post he gained in mid-October of 1644. Tseng Ch’ing may have returned from Fukien to Nanking with Huang Tao-chou, and the painting could have been done during the journey, but it seems more likely that the portrait was done in Nanking, during the early months of 1645, before Huang left the unhappy city again. [A portrait of Huang Tao-chou waiting at the palace gate for the early morning imperial audience was painted by Ts’ao Yen in spring of 1645; see Shen-chou Ta-kuan volume 2 and Liang Chang-chu: T’ui-an So-ts’ang Chin-shih Shu-hua Pa, 1845, chapter 17, pp. 19a-20a.] In comparison to the portrait of a year earlier, Huang is portrayed here as being larger and more forceful, as was appropriate considering the public nature of his responsibilities. No longer a teacher, and more exposed in every way, Huang also seems more inner directed, more protective of himself, and this too seems natural considering the continuous strife and turmoil that characterized political life in Nanking at that time, even in face of the oncoming Manchu armies. Huang was captured in 1645 and remained steadfast to the end, refusing to abandon his loyalty to the Ming and attempting to starve himself before being executed. Some part of his admirable character and will are manifest in the present portrait, and we too can conclude about Tseng Ch’ing that ‘it is not by chance that he walks alone in the groves of art.’