A foreground group of trees and blue-roofed house provide the visual foundation from which a complex mountain rises to the upper border of the picture. Punctuated by waterfalls and another house, the mountain form is further subdivided by drifting clouds, serried rows of pines, and dottings that represent grass, shrubbery, and distant trees. Light colors contribute to the pleasant and gracious mood that characterizes the whole.

Ts’ao K’uei-yin was born in Chiang-ning, the modern city of Nanking, probably around the turnof the 18th century. Nothing is recorded about his training as a painter but by the 1740s he was in Peking active at the imperial court (fig. 1). Access to the imperial collection provided Ts’ao was first-hand knowledge of earlier styles but, judging from extant paintings, his personal style was derived mainly from such earlier masters as Wang Hui (1632-1717) and his contemporary Tung Pang-ta (1699-1769) (fig. 2).

The formulation of the inscription as well as the artist’s seals here indicate that this paintingwas done for the pleasure of the Ch’ien-lung emperor (r. 1736-96). Judging on the basis of poems written for the paintings of Ts’ao K’uei-yin and recorded in the emperor’s collected literary works, Ts’ao painted quite often for the emperor, yet today the Palace Museum in Taiwan has only three works by the artist. This suggests that the emperor used them as gifts to officials or other favored individuals. And it should also be noted that the imperial inventory system was not perfect; the painting illustrated here as figure 1, now in the Palace Museum in Taiwan, bears a seal indicating that it was recorded in the Shih-ch’u Pao-chi San-pien while in fact the work does not appear at all in that inventory record. It thus is not to be wondered that the present painting is in private hands; another, dated to 1746, is now in the Hermitage State Museum in St. Petersburg. 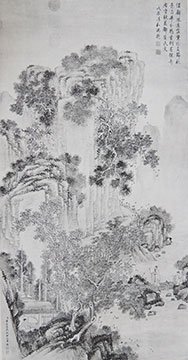