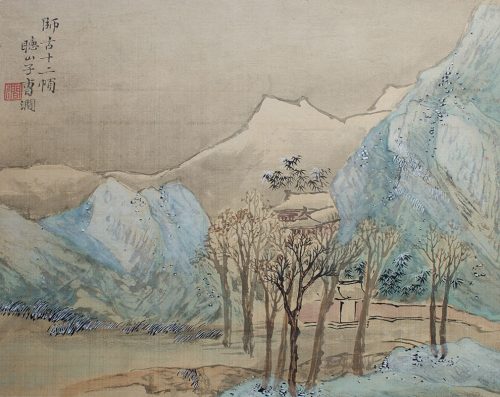 Inscription:
“Twelve leaves in emulation of the ancients, by T’ing-shan-tzu (‘He who listens to the mountains’), Ts’ao Chien.”

Ts’ao Chien, tzu Hsiao-yai (“Small Cliff”), hao T’ing-shan (“Listening to the Mountains”), was born in Hangchou, Chekiang province. His early style was clearly derived from that of Wang Hui (1632-1717) and very likely he was one of Wang’s seemingly innumerable pupils and assistants. Another of Ts’ao’s paintings, a “Landscape” painted in 1713, bears a colophon by Yang Chin, who was one of Wang’s closest associates.

The present album of paintings manifests a freedom of drawing and coloration that departs somewhat from the model of Wang Hui and is thus likely to be a late work by Ts’ao Chien. Although still following the orthodox tradition, the paintings suggest an artist a bit impatient with the received tradition, one who extended the parameters of his heritage and set the stage for the Eight Eccentrics of Yangchou who flourished during the middle of the century in a climate of social and artistic upheaval as well as economic florescence.