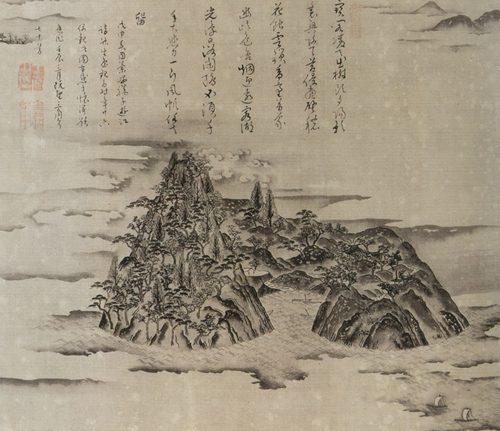 Inscription:
“During early summer of the year 1748 of the Enkyo reign-era, painted by Tō Shiboku.”

Artist’s seals:
Takafumi and one other

Box inscription:
by Kushimoto Tsuneyuki in 1915.

Authentication letter:
by Count Sano Joimin, head of the Nihon Bijutsu Kyōkai, in 1890.

The trip to Chikubushima mentioned by Tōgai for the year 1721 was taken and recorded before the present picture was painted. Tōgai’s son, Itō Tōsho, wrote the title for the present painting and it is likely that it was he who brought the earlier writing together with the painting of 1748. The painter Takafumi had visited the island at least by 1728, and his work of 1748 may be based on his recollection of the summertime trip in 1728 or be associated with another, later visit to the famous site.

The painter and the two colophon writers were all members of the Tsu clan. Okuda Sankaku, who added a colophon here in 1772, studied under Itō Tōgai and became a Confucian scholar to the clan. Takafumi, not well-known as a painter today, was in fact the director of the Tsu clan. He was from Ise and used the by-name Shiboku, the name used in signing the present painting.

Both Sano Joimin in 1890 and Kushimoto Tsuneyuki in 1915 record that the painting was displayed in an exhibition sponsored by the Nihon Bijutsu Kyōkai in 1890 and that during the course of that exhibition it was seen and appreciated by the Meiji Emperor.

Chikubu Island is located in the northern part of Lake Biwa, reached today by boat from Ōtsu. The area was rich in iron ore and already during the Kofun period the region was dominated by clans engaged in manufacturing, among them the Wani (“rust”) and Ibuki (“bellows”) clans. Chikubu-jima, “Bamboo Grove Island,” was considered a sacred site since ancient times; the Buddhist temple Hōgon-ji was likely founded by the monk Gyogi in the eighth century. Chikubu-jima came to be considered one of the three chief abodes in Japan of the powerful protector-goddess Benzaiten and the temples on the island were supported by Nobunaga and Hideyoshi from the 16th century onward. Takafumi’s painting portrays the physical configuration of the island with some exactitude but, on the other hand, includes none of the shrines (the Tsukubasuma-jinja, dedicated to Benten and Asai-hime no Mikoto, and the shrine dedicated to Benzaiten) or temples (the Hōgon-ji dedicated to Kannon), seemingly seeking to evoke the idyllic pastoral age of the pre-Nara era, before structures were first erected on the island.