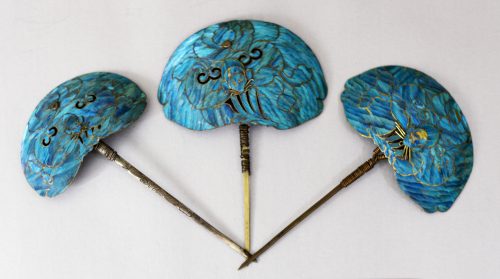 The wardrobe of hair accessories for the Chinese woman of means teemed with creations in jade, ivory, tortoiseshell, precious metals, gemstones and feathers. The kingfisher, whose colors were as brilliant as azurite, lapis, cobalt and turquoise and as iridescent as a soap bubble or butterfly wing, provided the material for the present hairpins. Each is decorated with a metal cloud-form ornament inlaid with brightly colored kingfisher feathers laid down in strips over a metal form. At the center of each is a figure of a whiskered bat with foliate wings outlined in thin silver, and two of the pins with openwork incorporated into their designs. The three accessories are similarly constructed with a tapered silver pin spring-mounted to the feather décor with tightly wrapped wire.

The use of kingfisher feathers for jewelry, clothing, and various decorative purposes reaches into far antiquity in China. Edward Schafer notes that “halcyon cloaks” were already in use in mid-Zhou times and by the Tang period “The vigor of the commerce in halcyon feather is attested to in many poems.”[1] Schafer chooses to use the word “halcyon,” the Latin word for “kingfisher“ to stand for the Chinese feicui. He further notes that the “dominant images of angelic cloaks and twinkling hair ornaments fashioned from the plumage of the fierce little southern fishers were rarely forgotten by the T’ang poets,”[2] In his monumenal work on Cbinese material culture, The Golden Peaches of Samarkand, Schafer brings to life such ornaments via the words of a Tang poet:

Kingfisher feathers could be combined with other materials, sometimes with dangling elements that would shimmer and tinkle with each movement of the head creating an effect termed buyao, “shake as you step.”[4] However, the present Qing-dynasty iterations rely on the stunning color and iridescence of the feathers, made even more captivating as they would have served as a foil to a head of glistening black hair. 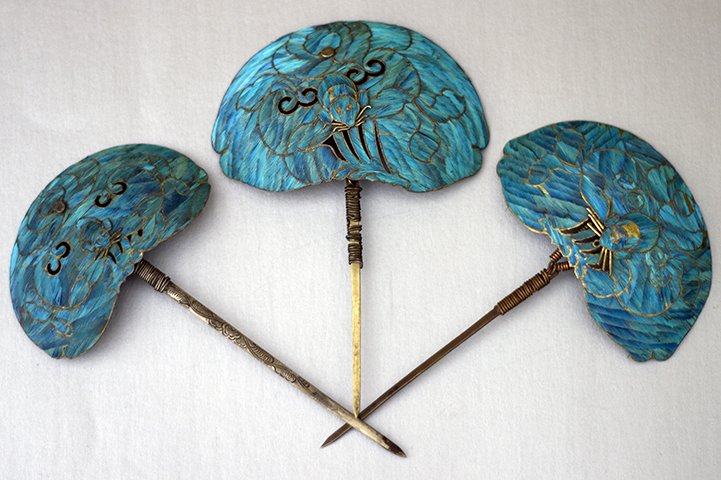