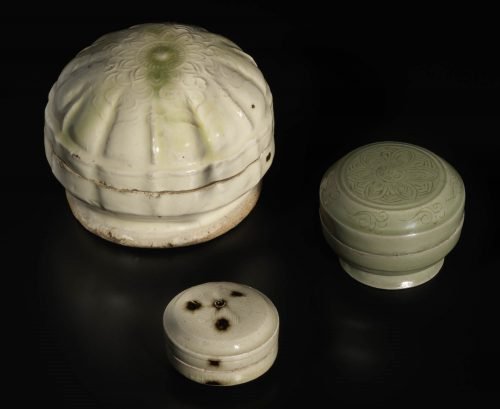 Inscription impressed on the base: Zhang.

The whole box is molded in the form of a high domed hexafoil, resembling a pincushion, and raised on a wide splayed foot. On the top of the cover is a lotus with striated center enclosed by a six-petal foliate collar all in raised thread relief. A creamy-white glaze covers the box with random splashes of lime color in the center and on the side of the cover. On the inside of the box the pinkish ware is covered with a clear glaze and on the flat base is the character “Zhang,” a surname, molded in relief.

Changsha wares were among Chinese ceramics travelling far and wide during the time of their production during the Tang and Five Dynasties period.. One of the most elegant of the products of the Changsha potters were boxes pressed from molds to produce complex metal-like shapes with attractive floral or geometric decor. Although these boxes are rare today, a number of them have been published including a small molded white-and- green glazed foliate box with character “Zhang” impressed on the base and a square box impressed with the character “guan” (“official”), both in the Hunan Provincial Museum and published in Zhongguo taoci quanji, vol. 5: Sui Tang, Shanghai, 2000, pl. 221 and pl. 160 respectively. A related example in the Hunan Provincial Museum was excavated in Changsha and published in Zhongguo qutu ciqi quanji vol. 13: Hubei Hunan, Beijing, 2008, pl. 197. A white-and-green-glazed molded box with the character “Zhang” impressed on the base, also unearthed in Changsha and now in the Hunan Provincial Museum is illustrated in the same publication, pl. 199.

The receptacle has slightly rounded sides, is raised on a thin splayed foot, and is covered with a flat-topped lid with a sharp edge surrounding the short vertical sides. A delicately incised six-petal lotus floret with pod center encircled by detached cloud scrolls decorates the top. The cover fits perfectly on the rimmed receptacle and the whole is covered overall with a greyish green glaze with a glassy well-preserved surface. On the base are the rough elongated marks left from the spurs on which the piece was raised during firing.

The small Yue box is a charming example of the 10th century products of kilns located in northern Zhejiang province where the stronghold of the southern celadon tradition had been headquartered for many centuries. The delicate linear incisions reflect the quiet, restrained and refined beauty of these wares as they reluctantly ceded clients and patrons and the future of the celadon tradition to others, passing the torch, so to speak, by the early Song period. The present box is like a precious memento from the latter years of the life of Yueyao.

The box has straight sides and angles sharply inward at the waist to the flat base. The cover is also flat sided with a sharp edge enclosing the slightly domed top. A very refined five-petal flower that appears like a pin-wheel is applied to the cover with its combed petals radiating from the circular center highlighted with a deep greenish-brown dot. Three further decorative dark greenish-brown dots are interspersed between the petals. Additional dots on the side of the box and one on the side of the lid are markers for fitting the lid correctly onto the receptacle. The clear, very bright, almost colorless glaze covers the exterior and interior of the receptacle and cover, aside from the base where the compact white ware is visible. Where the glaze is thickly applied, a hint of green is apparent. The glaze is lightly crazed and minute ferruginous specks are visible in the body below.

The small whitish-colored box with its applied wispy floral bloom on the lid and highlights of colored dots is part of a closely knit family, another member residing in the Tokyo National Museum, illustrated in Sekai Toji Zenshu, vol. 11 (Sui-Tang), Tokyo, 1976, pl. 95, p. 113. The type is closely related to “moth” decorated boxes similar in glaze, applied motif and brown dotting. What is surprising is that the motif, which at first appears either molded or combed and carved, is in fact an appliqué. While the presence of a moth-decorated box in a Tang period tomb suggests a general date of production for that type, it is also believed that production for those and the floral-decorated boxes might have continued into the Five Dynasties period. The place of production remains a mystery, a number of northern provinces laying claim to these whimsical creations.