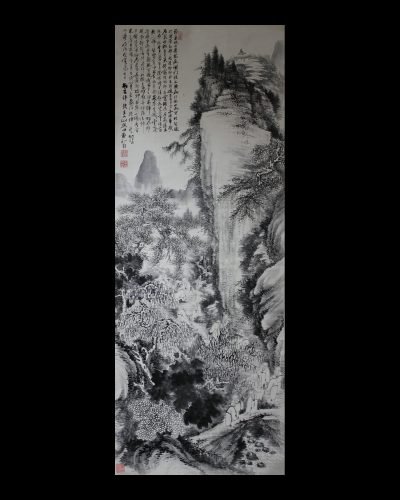 Inscription:
“Beneath the trees are many thoughts of the immortals,
morning and evening white clouds are close to me;
The road is bordered by tangles of lotus,
houses are adjacent to monkeys and cranes.
Composing the mind is a kind of pleasure,
lacking any business makes for a noble man;
Persimmons and chestnuts provide a sweet taste,
and I know not the aging of this body.

During the eighth lunar month of the year 1890, the twenty-third of the Meiji reign era, Myomyo-koji took one look at this scroll and deeply loved it, but he didn’t claim it. After considering his feelings, I decided to present this to him. To increase his pleasure with this scroll, I daily worked anew before giving it to him. Chokunyu.”

This painting is one of Chokunyu’s masterpieces, and fully justifies the very high regard in which he is held today. According to the research of Professor Watanabe, Chokunyu, his wife, and his pupil Myomyo-koji were in Onomichi (Hiroshima prefecture) in 1889, where Chokunyu was executing a painting for a patron. Myomyo-koji, however, liked that painting so much that he bought it from his master. Although Chokunyu agreed to sell it (for a third less than the then-current market price), he seems to have disliked accepting money from his student, and this perhaps led him to give the present painting to Myomyo-koji as a gift, knowing that the student loved the painting but could not afford it.

Tanomura Chokunyu (1814-1907) was born in Takeda Village in Bungo province, the third son of Sannomiya Denuemon, a samurai of the Oka clan. His uncle, Watanabe Hoto (1752?-1833), also served the Oka clan, and, since Hoto was teacher of Tanomura Chikuden (1777-1835), whose father also served the Oka family, it was natural that the young Chokunyu studied with Chikuden, and, at the age of eight, the child prodigy was adopted by his teacher. After the death of his teacher, Chokunyu studied with great intensity the Chinese paintings then in Japan, so his works varied greatly in style depending on the source he was following. The style of the present painting allies it closely with works by such late Ming masters as Mi Wanzhong (fig.1) and Zhang Ruitu (fig. 2.)

Chokunyu was also a poet in Chinese style, a student of Chinese Neo-Confucianism and Zen practices, the Japanese tea ceremony, incense burning, and the use of swords and spears–a truly well-rounded literatus. Chokunyu also helped establish the Kyoto Municipal School of Fine Arts and Crafts and was its first director. In 1896 Chokunyu established the Nihon Nanga Kyokai in cooperation with Tomioka Tessai and Taniguchi Aizen. A major leader of the Nanga movement during the Meiji era, Chokunyu was frequently a juror for exhibitions and had numerous pupils–all in all a most worthy follower of his master, Chikuden. Some critics, forgetting the great achievements of Tomioka Tessai (1836-1924), have termed Chokunyu the last of the great literati masters of Japan.