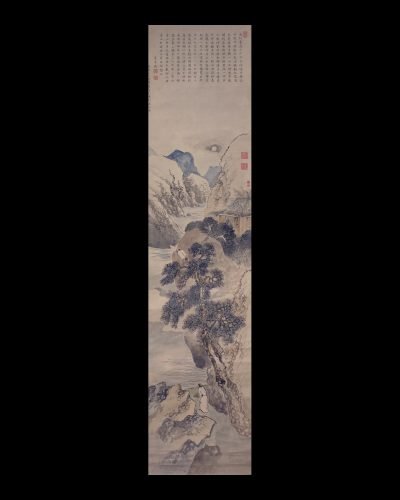 Colophon by Daiten Kenjyo (1719-1801):
“The Tang poet Ren Fan travelled to Jinzi Peak at Mount Tiantai and inscribed a poem on the wall of a temple there, saying:
‘At the very top the new autumn produces cool evenings,
cranes fly and dew from the pines drops on my clothes;
Over the peak before me the moon shines on the whole river,
on the blue-green hills a monk built a hut in the bamboo.’
However, (Ren) later returned from a hundred li to change the character “whole” (river) to “half,” which makes a good story about a poet. I came across this in reading the “Biography of Caitzi” and in response replied with a verse as follows:
‘When the rain ceases in groves of trees fresh sounds arise,
the moon rises over the peak and half the window is bright,
The mountain monk meditates where no one sees him,
in a cold pine of a thousand feet a crane is startled. ‘
During the ninth month of the year 1786 of the Tenmei era, the Priest Gessen came from Gose and stayed here. He happened to open my anthology and saw this poem; enthusiastic about its beauty, he at once licked his brush and did this painting, joining the concepts of the two poems. Not using any models, in a flash it was finished, but is it not also elegant? Since it is finished, I record the affair at the top. The priest (Gessen) also wrote a verse, saying:
‘Half the river’ and ‘half the window’
will be excellent circumstances for a thousand years;
Relying on the work of red and green (pigments),
I travel (in the painting) so I don’t have to memorize it.
So I also inscribe it here.
Recorded by Shochu.” Seal: Jikujyo

Colophon by Imei Shukei (1731-1808): “The priest Imei on reflection drew a bamboo grove so as to establish the idea of a hut in bamboo.”

Collector’s seals on far-right margin:
Shu Getsu “Pine Moon;” these may be the seals of Imei Shukei, who inscribed the painting on the far-left margin.