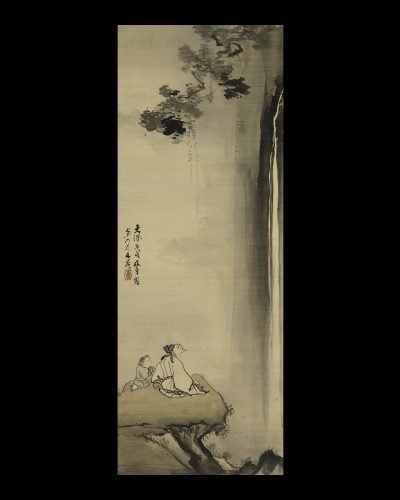 Inscription:
“During the eighth month of the year 1838 in the Tenpō period, painted by the seventy-five-year-old man, Bunchō.”

The Tang poet Li Bo (701-762) is portrayed as sitting on a bluff, attended by servant, and gazing across a misty valley at a torrential fall of water from far above. Seated on a mat, and wearing scholar’s gown and hat, the poet looks up intently as though mesmerized by the sight and sound of the waterfall. One suspects that a poem is even now being created within his very active mind. The subject here is Chinese and so too is much of the style, but with brushwork that is a bit more abstract than his continental models.

Tani Bunchō (1763-1840) was born in Edo, the grandson of the well-known poet Tani Motonori (1689-1752), who held the high rank of Fushin Bugyō, Magistrate, and was known for his knowledge of economics as well as for painting and poetry. Bunchō’s father was Tani Rokkoku (1729-1809) who was also famed as a poet and a vassal of Lord Tayasu, second son of the eighth Tokugawa shogun. At age eleven Bunchō began studying painting with Katō Bunrei (1706-1782), a Kano-school artist, and at age seventeen he studied with Kitayama Kangan (1767-1801) and Watanabe Gentai (1749-1822). Kangan was the son and pupil of an immigrant Chinese painter who repaired the observatory instruments for the bakufu government and thus knew Westerners, from whom he learned Western languages and painting. Kangan’s Western-style paintings were praised by the Dutch, who said they were reminded of Van Dyck, so Kangan sometimes referred to himself as Handeiki. Watanabe Gentai’s father served the Yamanouchi clan as did the painter Nakayama Kōyō (1717-1780), who was asked by the dying Watanabe Shōsui to take over responsibility for the young Gentai’s artistic education. This Kōyō did, emphasizing the need to study early Chinese paintings as well as theory before evolving a style of his own. In 1805 and 1806 Gentai published the Gentai Gafu, the second of which has a preface by Gentai stating that copying original works of art by a variety of old masters was essential to success, and Gentai’s selection of masters suitable for emulation makes clear that he advocated study of a very wide range of styles. Thus from a very young age Tani Bunchō was exposed to Japanese Kano style, a full range of Chinese styles, and also Western approaches to painting.

The present work was done when he was seventy-five years old, toward the end of his life. A simple picture yet highly satisfying because the master painter knew exactly how to achieve his desired effect.

1. The Taichō-kaku (“Facing the Tide”) Collection was formed by Yamashita Kamezaburō (1867-1944), founder of a powerful shipping company that survives today as Shōsen Mitsui. The collection was housed in a villa in Odawara.