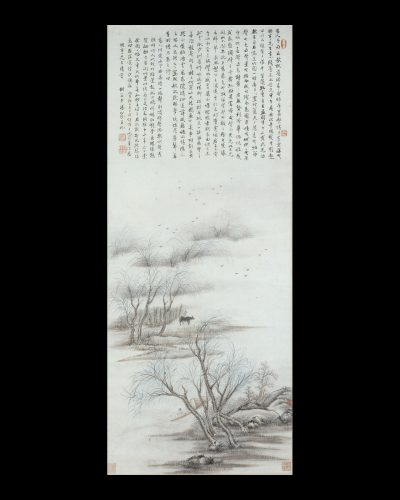 The artist of this simple yet very evocative painting explained the origins of his conception in the long and thoughtful inscription filling the upper portion of the painting. The friend referred to as Master Langting was Shen Zhaolin, jinshi in the year 1836, subsequently Governor-general of Shaanxi and Gansu provinces, and then one of three Grand Guardians of the Heir Apparent. In a note written by Shen to the artist, he recalled a trip he taken in the year 1834, during which he encountered natural scenery that entered his imagination and stayed long in his memory. In 1846 he requested a painting from the artist, mentioning in particular a flock of birds wheeling above a boy with flute on the back of a water-buffalo. The artist then goes on to think on how to bring this project to a successful conclusion. First was the necessity to evoke both the color and the sound of the original experience, which he relates to a proper composition, which should be artful but not obviously so. Technical aspects such as shading and the addition of significant details—such as the fishing skiff in the resulting painting—are important but so is the creativity brought about by thought. The artist’s response to his own challenge adds another layer of richness through his written and stylistic reference to the earlier masters Yun Shouping (1633-1690) and Wang Hui (1632-1717), artists of the Orthodox School then prevalent in the court circles inhabited by Shen Zhaolin.

In its composition, with careful and significant placement of pictorial forms, the work conforms to the artist’s goals, with a sense of naturalism dominating the visual impact. This image must have been well-pleasing to Shen Zhaolin, who acquired both a verbal and a visual record of his memorable experience.

Inscription:
“A man in the past (Lu Yu) had the lines: ‘Leaning on a pillow I travelled to the end of my vision.’ No doubt his feelings for the scenery were deep. Master Langting wrote me a note, saying: ‘During spring of the year 1834 during the Daoguang era, I travelled by boat to Pingqiao (‘Level Bridge’) and viewed its scenic splendor, composing several lines: ‘On the back of birds the setting sun, on the back of an ox an oxherder boy, his figure placed within a painted picture.’ Thirteen years have passed like a flowing stream but this is still within my eyes.’ He repeatedly requested me to portray what he had seen on his trip so he could place it in his travelling case. The waning sun has color, the boy’s flute has sound, so there is color and sound in the scene. Selecting from among his completed verses and painting these in a picture results in emotion. What land lacks scenery, and what land lacks sound and color? These special circumstances would seem to privilege bustling agitation or confused delusion, or perhaps like rice and sand in fragmentary confusion, like the right and then the left foot running over the land, a good scene ought to scatter and intertwine these compositional arms and then lose them. Seeing like not seeing them, hearing like not hearing them. Moreover the setting sun is an evening color, and the boy’s flute is a rural sound. This can be compared to the fresh beauty of powdered white and blackish green, and pity for the freezing misery of a clumped bamboo grove, mutually different from not only heaven and earth. The wise man does not praise this but praises that, for example rejecting gaoliang (liquor) but being fond of conch or clams. Excellence comes from shading solitary clouds at the heaven’s edge, adding fragrant grasses to sandy shoals, placing willows at mountain passes, pointing to peach trees in the village, and then obliterating all surviving traces (of the artistic device. Look at it without stopping: if several sounds reach your ear and you hear without analyzing it, then this is a picture from heaven. How can these things be achieved with formula painting? Be that as it may, the mist and clouds that pass by our eyes are transformed to make a composition, travelling the road, wandering through obstacles, rely on memory leisurely emotions to keep its vastness. And neither can one regard completely this as unimportant. Leaning on a pillar silently dreaming, in the end the delight was like becoming enlightened. I thus made a poem, saying:

The noble man loves songs of water and clouds,
after the oar rests its song lingers on;
On the riverbank someone plays a short bamboo (flute),
filling the sails we begin to see our late circumstances.
Graceful and lovely red captures the drooping willows in green,
behind the ravens fluttering about an ox carries in leisure;
He can’t get enough of this scene and these emotions,
carrying them in his bosom for thirteen years.
Today he asked me to paint a picture,
an essay on nature that should not be personal;
A skilled hand can capture what the master alone
thought and saw, getting it while twisting the mustache,
and during mid-night returning near to the Sand Gull Lodge.

During the first ten days of the seventh lunar month, Fall of the year 1846, I followed the brushwork of Yun (Shouping) and Wang (Hui) and did this for the pure pleasure of Master Langting. Your younger brother, Zhouweng.”