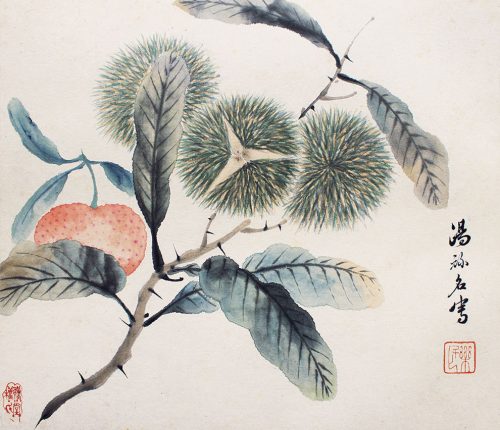 Various fruits and vegetables are arranged in a series of twelve compositions designed to provide variety while yet showcasing the subjects. The drawing is highly skilled while the addition of color enlivens and acts to further characterize the individual types of fruit and vegetables. Considered as a series of still-life vignettes, the work is highly successful, presenting a good range of subjects in a pleasing variety of compositions.

T’ang Lu-ming was born in Wu-chin, the modern Ch’ang-chou in Kiangsu province. There is no record of his passing even the local examinations but he did receive appointment as Supervisor of Transport for the Liang-huai district, responsible for the transport of tax commodities such as salt to the capital. The headquarters for the Liang-huai district was located in Yangchou, and the present work owes much in style and conception to Li Shan (1686-ca. 1736), one of the so-called Eight Eccentric painters of that city.

Born the fourth son of the famous T’ang I-fen (1778-1853), T’ang Lu-ming received his basic training from his father; his earliest known painting, dated to 1830, was contributed to an album by his father. Lu-ming became especially known for his pai-miao figure paintings, which were held to approach the standard set by the Sung master Li Kung-lin (1049-1106). He also excelled in painting beautiful ladies (fig. 1), many done after the style of Hua Yen (1682-1756). The other paintings of “flowers, rocks, birds, and fish from his hand were also marvelous…” and to this, on the basis of the present album, we can add fruit and vegetables.