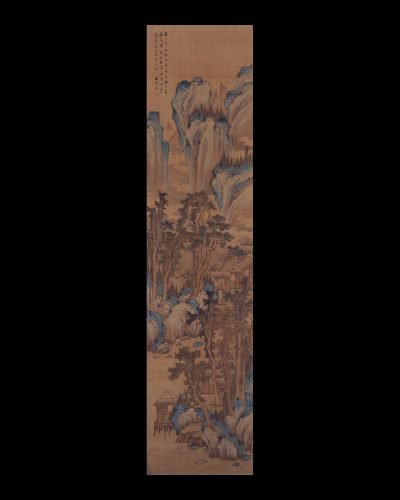 Inscription:
“In his long handscroll ‘Waterfall in Pine Valley’ Zhao Danian (Zhao Lingrang) applied heavy blue and green coloring. Hengweng (Wen Zhengming) made many copies, and in their wondrously subtle passages truly followed in the footsteps of the ancients. Jun, called Shigeng.”

The development of the colorful blue-and-green landscape style of the Tang dynasty is attributed to the ingenuity of Li Sixun (651-716) and his son Li Zhaodao (active 670-730). Members of the imperial family, the two were professionally bureaucrats and their painting careers basically avocational. Similar to the fate of the ink-monochrome paintings of Wang Wei, the works of Li father and son do not exist to us today. However, the paintings are recorded as having been brightly colored, sometimes enhanced with outlines of gold, meticulously executed, and decorative in nature. Dong Qichang (1555-1636) understandably recognized Li Sixun as the founder of his Northern School of painting. The espousal of a studied, painstakingly careful approach to produce a painting was contrary to the spontaneity of Dong’s Southern School.

The blue-and-green style was adopted by distinguished artists over the centuries and was not restricted by any means to paintings meant to be singularly decorative in nature. Song dynasty artists who adopted the style most effectively were, interestingly, members of the imperial family: Zhao Danian ((Zhao Lingrang,1070-1100) and Zhao Bozhu (ca.1120-ca.1162), and one, Wang Shen (1046-after 1100), who married into that imperial family. Eminent painters of the Yuan found the style a way to evoke a cherished past and also to create idealized realms. The style was brought to decorative peaks by Qiu Ying (1494?-1552) of the Ming while one of the most illustrious painters of that dynasty, Wen Zhengming (1470-1555), had more expressive ends in mind when resurrecting the blue-and-green style.

It is not surprising that Zhao Danian and Wen Zhengming are recognized by Tang Jun in his inscription as working in the blue-and-green style and hailed for “…truly following in the footsteps of the ancients.” The archaistic coloring system and tall, elegantly elongated trees together with limited use of texture strokes are indicative of how such later artists as Tang Jun depended on the Li-family style almost a millennium after its birth during Tang dynasty.