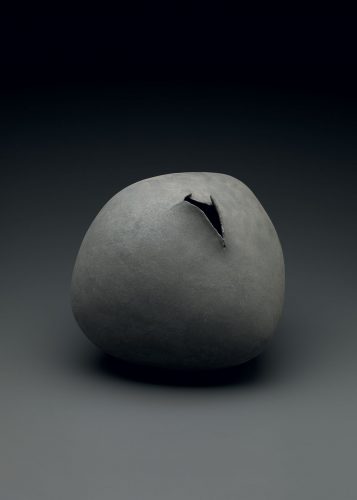 The vase is a dark grey stoneware of vaguely triangular egg shape with a slashed aperture on the top that serves as the mouth of the vase. Although the hole was intentionally crafted, it appears as if it spontaneously formed when air burst out from the interior. The edges of the mouth are thin walled and it is not impossible that the walls lower down are equally thin, although somewhat thicker walls could account for the great weight of the vessel and its ability to balance upright despite the rounded base. From a distance the vessel appears like a smooth river stone; closer at hand the crenellation of the clay surface is revealed, appearing almost as if a skin over the vessel had dried and wrinkled. The overall appearance, however, is one of great buoyancy and lightness on the one hand and a somber, settled darkness on the other.

Does the present vase with its modern look channel the past in any way? Definitely. The mere respect for the materials, the absence of adornment, the asymmetrical shape that appears to have come about naturally, and the “imperfection” as seen in the ragged edges of the mouth, are each and every one in the spirit of the aesthetic developed by Japanese tea masters active many centuries prior to this vessel’s creation.[1] The ripped clay producing the mouth is a brilliantly contrived affect, much like early 17th century Chinese potters deforming their pots purposefully and allowing imperfections to develop to suit the taste of their clients in Japan.

Takiguchi, born and raised in Kyoto, began by apprenticing with the famous Kyoto potter Kiyomizu Rokubei VI (A.D. 1901-1980). An internationally well-known and admired potter, Rokubei not only promoted the Kyoto ceramics that were his heritage but at the same time championed individualism in ceramic creation and nurtured such young talents as Takiguchi. The young potter also engaged for a short time in formal art studies at Geidai University, where he had the good fortune of studying under Yagi Kazuo (A.D. 1918-1979), one of the founders of the Sodeisha ceramic group in Kyoto whose members took a path in opposition to the folk art or craft movement, known as Mingei, as well as opposing, ironically, the aesthetic inherited from the Momoyama-early Edo period tea masters in which rusticity and naturalness were the lynch pins. Non-functionality in ceramic art was not only a goal but at the center of their credo. While Takiguchi’s work in this mode appears more abstract than functional, in keeping with the Sodeisha creed, the torn open wall of the vessel is perhaps a way of breaking out of this training and mind set, as it produced a functioning vessel.Some think of the ripped openings in Takiguchi’s vessels as invitations to enter the space within where a volume of air is contained by the very walls that it seems to have pushed out, displaced, and caused to take form around it. However, the edges of the tears are as if shrapnel has flown through; the message is an aggressive, prohibitive, inhibitive one, which drives us away rather than pulling us in. But then we have the leisure to circumvent the vessel and experience it, naturally and predictably, from without.

The amorphous, organic forms of Takiguchi’s ceramics are sometimes enhanced with light coatings of glaze, as in a large vessel in the Victoria and Albert Museum in London (fig. 1). Rupert Faulkner makes note of this ceramic as “a remarkable piece of work fashioned from a single large slab of extremely thin clay.”[2] The present jar is also phenomenal as one scans its surface to find clues to how it came into being. It is not obvious and it was not easy to achieve: “The technique involves preparing a large sheet of extremely thin clay that is then folded and joined in a dynamic sequence of movements into a structure immediately resembling that of the intended final form. In the mid-1980s, when Takiguchi first used the technique, he lifted the clay up from the floor. Because this limited him to rather box-like shapes he went on to develop a way of draping the clay over moulds made from loosely assembled components and making his forms upside down. The new method allowed him to achieve the greater sense of fullness that he sought. At the same time the possibility of rearranging the components of the moulds allowed him to experiment with a much wider range of shapes than before. Having made a basic form, Takiguchi uses a number of secondary techniques to give it definition and character. These include pushing the walls out from the inside, compressing them from the outside, and cutting and joining, sometimes with the addition or removal of segments of clay.”[3] The present vessel would have required less; the one component is complete in and of itself and in that respect it is more primal than the more complex “constructs” of the artist.

The present ceramic represents one side of Takiguchi’s work; on the other are colorfully glazed wares in a variety of whimsical shapes, obviously decorative and utilitarian, jovial, upbeat and appealing to a different aesthetic sense, but deeply rooted in Kyoto traditions. His ability to work on what are opposite sides of the coin so to speak, to create wares able to conjure the dark mystery of night or the light, frolicsome air of a sunny day, have established Takiguchi as a highly versatile potter and a worthy recipient of the numerous accolades and awards that have come his way during the course of his career. 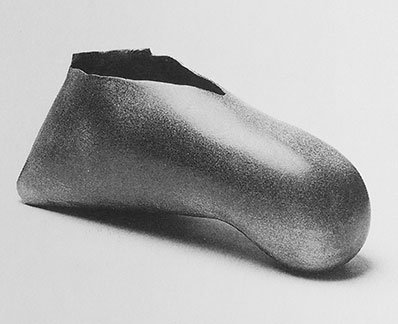