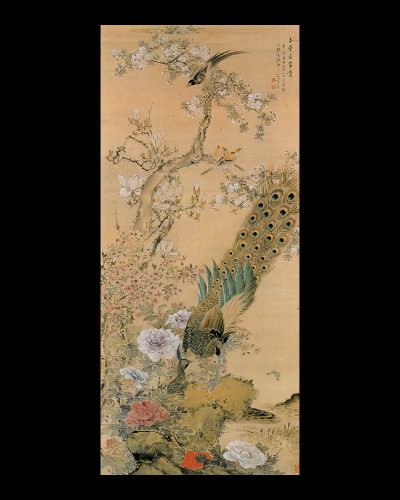 “Spring Riches and Honor in the Jade Hall”
玉堂春富貴賀

Inscription:
“’Spring Riches and Honor in the Jade Hall.’ Painted during spring, the fifth month of the year 1891, by Katei Sei on the river at Nijo Sashun-ro (in Kyoto).”

Male and female peacocks pose on a garden rock surrounded by gorgeous peony blossoms while a mountain cherry tree, azalea, and white magnolia provide further spectacle above as well as perches for additional auspicious birds. The connotations of the peacock—beauty and high rank—are well-matched here with the peony, the King of Flowers in China and symbolic of honor and riches, a wide range of meaning that is augmented in the title written by the artist
“Spring Riches and Honor in the Jade Hall”

Katei, a samurai’s son from Hiroshima, displayed an early love of painting, was able to study classical Chinese literature and calligraphy during his formative years, and then in Nagasaki became familiar with various styles of Chinese painting, including the bird-and-flower manner of the great Chinese master Yun Shouping (1633-1690). Katei was also able to learn directly from Chinese artists then active in Nagasaki. On future travels he met up with Baiitsu and Chikuto, each with a painting in this exhibition (nos. 21 and 20). The bird-and-flower paintings executed on the cedar doors and ceiling of the Residential Hall in the Imperial Palace during renovation demonstrate his mastery of the style of Yun Shouping also evident in the present painting executed fairly soon after the imperial commission. Laurance Roberts has identified a primary reason why the manifold talents of Katei have not received due recognition in modern times: “(Katei is) much neglected as a result of the disturbances surrounding the Restoration (of imperial rule in 1868). (He was) an admirable painter of kachōga (bird and flower paintings)…” [Laurance Roberts: A Dictionary of Japanese Artists (Tokyo, 1976) p. 171]