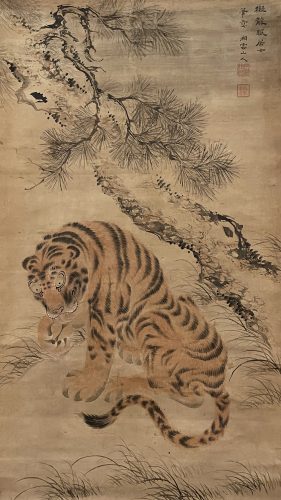 Inscription: “Painted in emulation of the conception of the Recluse of Longmian (Li Gonglin), by Shoun Sanjin.”

Artist’s seals: Shoun; Teizui no in

Tiger: an animal territorial, predatory, overseer of the West, courageous guardian against evil. Yet here we see this fearsome beast licking its paw, self-absorbed, non-threatening, passive, remote. The face and fur of the tiger were executed with deliberation and care, the soft orange pigment of the tiger’s coat setting it off against the background of a pine trunk done in ink only, abbreviated and abstract, brushed with spontaneity and abandon.

Images of tigers painted by Japanese artists were not based on the creatures themselves. The painters relied mostly on pictures produced by Chinese artists that were brought to Japan either by Japanese monks returning from the mainland or by Chinese monks seeking refuge in the wake of the Mongol invasion. Most iconic, and apparently the original model for works such as the present, was a tiger painting by the Chinese monk-painter Muqi (1210? – 1269?). Muqi’s tiger was one of a pair of paintings intended to flank a central Buddhist image, the other a dragon, overseer of the East. This pair, in the Daitoku-ji in Kyoto, was likely in Japan by the 14th century and served as a model and inspiration for Japanese painters thenceforth. Sesson (1504-1589?), Shōei (1519-1592), Kaiho Yusho (1533-1615), Sanraku (1559-1635) and Ito Jakuchu [1716-1800) were among the pantheon of Japanese artists known for stirring renditions of tigers, sometimes paired with dragons. Shoun was a worthy member of that lineage.

Rather interesting is Shoun’s mention, in his inscription, of Li Gonglin (ca. 1049–1106), the illustrious Song-period literati artist. Although Li Gonglin is not regaled nor remembered for painting animals, a painting of a tiger long attributed to him is held in the Shoden-ji in Kyoto, the ancient city that was the birthplace of the present artist.