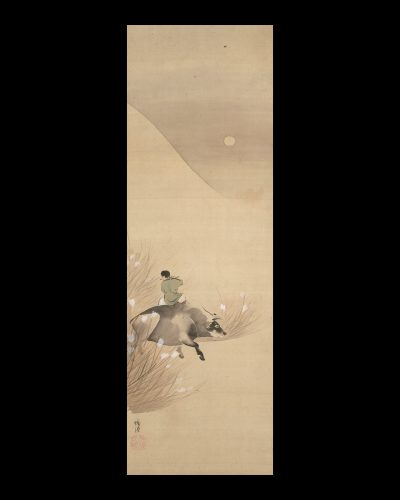 Suzuki Kimin, called Reitan, was born in Himeji of a samurai family in service to Sakai Tadazane. By his master’s order, Reitan became the disciple of Sakai’s younger brother, the painter Sakai Hoitsu (1761-1828). Through his study with Hoitsu, Reitan became skilled in figure and in flower-and-bird painting. He was adopted by Suzuki Shuntaku, who had served Hoitsu, and Reitan succeeded to that position. When Reitan died at the age of only thirty-five years old, Kiitsu (1796-1858) was adopted to fill his place in the family, and he too became a pupil and important follower of Hoitsu.

Given the early death of Reitan there are not many extent works, but his individual artistic personality is clearly visible in them. Featuring soft and delicate brushwork, these paintings show the artist’s skill in handling brush, ink, and color in capturing the esential qualities of his subject, often with a very attractive flair and sense of humor. His themes in these paintings range from the limitless glories of nature to the homely attractiveness of a raku bowl, all executed with a superlative technique equal to that of his master.

In the present painting a very few pictorial elements are so arranged as to yield a very rich and satisfying whole. Autumn grasses with white flowers define the area through which the figures move, the buffalo is done in a tarashikomi technique reminiscent of Sotatsu, the boy playing a flute as his charge finds its own way home has a charming simplicity, and the moon bathes the entire scene in a romantic glow appropriate to the seasonal and temporal mood. This and Reitan’s few other paintings make his early death all the more regrettable.