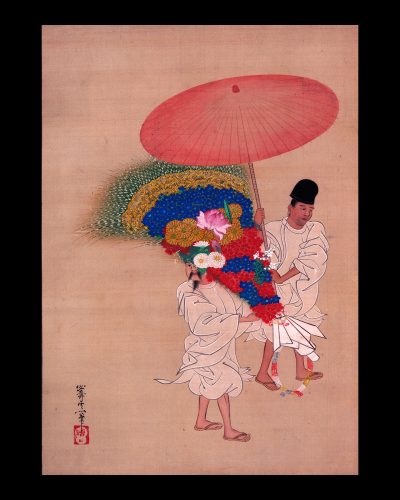 “Flowers for the Emperor”
供花圖

Kubosō Museum: Gyōji-e—Shiki no Irodori, (“Special Events of the Year Associated with the Four Seasons”), Osaka, 2002.

Wrapped at its base by washi paper in fan shape, and tied with mizuhiki thread, a gorgeous bouquet of flowers is carried carefully by a servant while another shades the blossoms from the sun. The event portrayed here occurred annually when the Konoe family submitted a bouquet of autumn flowers to the imperial court. Seven different kinds of blossoms are included here, arranged so as to create a lovely and very distinctive decorative pattern from the natural forms of the flowers. The practice of presenting flowers to people in autumn appears among common people at least by the sixteenth century. Several leaves in the Jūnikagetsu Fūzoku Zu Chō (“Album of Secular Paintings of the Twelve Months”) contains several leaves in which men or woman are presenting flowers to others (fig. 1).

The modern scholar Tsuji Nobuo has analyzed the development of Kiitsu’s signatures and distinguished four sequential periods, designated as A, B, C, and D.[1] The present “Flowers for the Emperor” belongs to the A type, used during the period when Kiitsu was establishing his own style. The seal Kaikai was used toward the end of this period, when Kiitsu was in his early to mid-thirties.

Suzuki Kiitsu (1796-1858) was born in Omi province, the son of a dyer who later moved his shop to Edo. Working first as a dyer, Kiitsu invented the technique of murasaki-zome or dying with purple. Kiitsu was then adopted by the samurai Suzuki Reitan (1782-1817), who was an attendant to Sakai Hōitsu (1761-1828), second son of Lord Sakai of Himeji Castle in Harima province. In 1813 Kiitsu became a live-in disciple of Hōitsu and soon came to be regarded as the most promising student of the master. When Reitan died in 1817, Hōitsu arranged Kiitsu’s marriage to Reitan’s sister, Riyo, which allowed Kiitsu to succeed to his father’s position with the Sakai clan and to serve Hōitsu until the latter’s death in 1828. Between 1817 and 1828 Kiitsu studied tea ceremony and haiku poetry under Hōitsu and associated with such literati masters as Kameda Bōsai (1752-1826) and Ōta Shokusanjin. Many of Kiitsu’s early works bear inscriptions by them as well as by Hōitsu.[2] During this period Hōitsu gave Kiitsu the by-name Niwabyōshi, which was later used by his own son, Shuitsu. Seven extant letters from Hōitsu to Kiitsu shed fascinating light on the relationship between them, since they request Kiitsu to execute paintings on behalf of Hōitsu.[3] 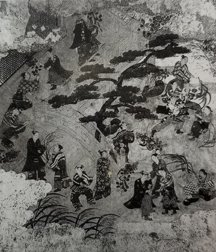