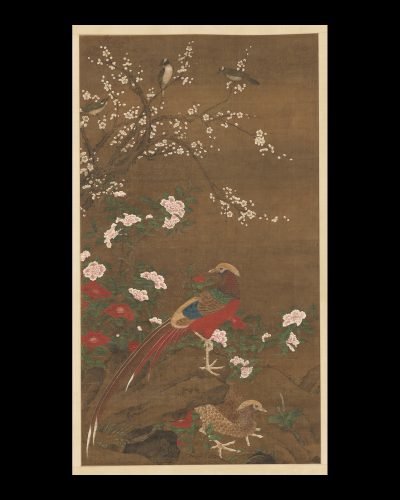 The handsome composition features a male pheasant posed atop a rock at the base of which appears his female mate. Camellia and hibiscus blossoms surround the bird and add their color to the attractive scene, the whole crowned above by a branch of flowering prunus supporting three birds. A shallow pictorial stage is created by the rock and earthen bank in the foreground, and there is some overlapping of forms above, but the main emphasis is on the frontal picture plane and the display of the colorful forms.

All of these elements carry well-known auspicious connotations that increase the depth and complexity of the painting. The male golden pheasant, for example, was the symbol of an official in the civil service, rendering the painting an ideal means of expressing a wish for advancement in government service. The hibiscus stands for fame and riches, the camellia for feminine beauty, and the prunus for fortitude under duress, and all of course are graced by lovely and distinctive scents. The painting thus abounds with visual delights that are augmented by very auspicious associations.

Sun Long, the artist to whom this painting is attributed, was born in Wujin, Jiangsu province. Called to court about the middle of the 15th century, Sun served as a court painter, “Supplying the Emperor at the Golden Gate,” according to the legend of one of his seals, this last being the location where in the imperial palaces of old, the various attendants awaited summons. However, most of Sun’s extant painting feature a “boneless” technique (fig. 1) that is not to be seen in the present painting. The style here is in fact closest to that of a slightly later master, Lu JI (ca. 1440-ca. 1505), who also served at court during the later 15h century (fig. 2). Many paintings produced at court during this era were taken to Japan, where they graced the halls of important daimyo, and Kano Tan’yu, who evaluated this work, was often asked for his opinion on such scrolls such as the present. 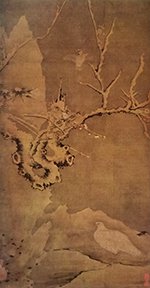 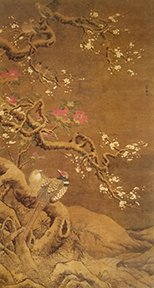