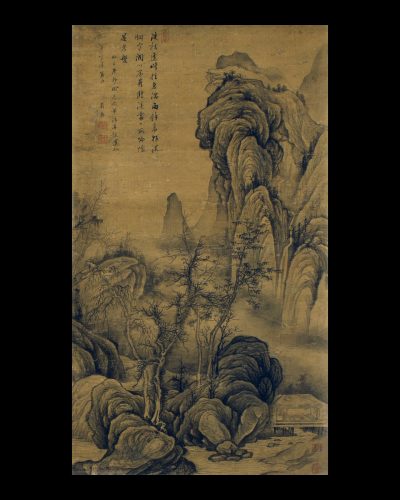 “Dwelling Amidst Clouds and Bamboo” 1689

Inscription:
“’Dwelling Amidst Clouds and Bamboo.’
Light color on the distant peaks from which depend the rushing torrent,
after rain the tall trees in fog and mist are cold;
The mind at rest does not stop beside a stream;
selecting one verse from the heart completes the transfer.

Late in the year 1689 I followed the brushwork of a Yuan master and painted and inscribed this for the judgment of old Daoist __. Su Ding.”

The complex landscape setting, arranged along the diagonal axis rising from lower left to upper right, features a riverside pavilion in the lower right housing two friends in conversation. Separated from the foreground by a mist-filled valley, precipitous mountains rise above nearly to the upper border of the picture.

The season is winter, so the trees lack much foliage and this concentrates viewer attention on the configuration of the rocks and mountains. These are generally textured with what could be termed “oyster-shell” strokes, repeating the outer contours with interior washes and strokes that lend convincing three-dimensionality to the form. Much of this style can be traced to works by Dong Qichang (1555-1636) and his immediate followers, such as Wang Jian (1598-1677) (fig. 1). In both cases the artist emphasizes the quality of his brushwork, and that is the point of the literati approach to painting.

Despite the quality of the painting, which suggests that Su Ding was a very talented and well-trained painter, he is not recorded in standard biographical texts of the time, the Tuhui baojian xujuan of the 1680s and the Guochao huazheng lu of 1735. This suggests that he was active during the later 17th century, too late for inclusion in the first of these texts and too early for the second. In any case, the style of the painting supports a dating to the later 17th century. 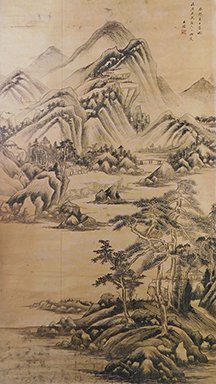