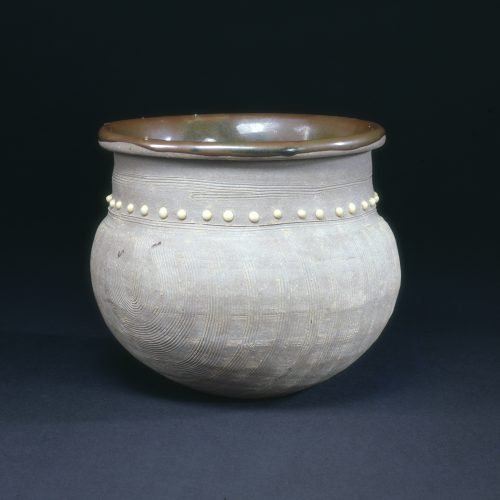 Of globular form with high neck, wide mouth, and rolled mouth rim, the vessel is a dark grey stoneware, the exterior unglazed and decorated with combed concentric lines forming semicircles resembling basketwork on both front and back and burnt brown in firing. Raised bosses or dabs of white glaze circle the jar like a necklace below the mouth. The interior is coated with a thick, lustrous, russet-brown glaze that also sweeps over the everted rim. A round flat area is cut into the base to serve as a stabilizing foot.

Qili village on the Gan River in Jiangxi province appears to have been the major site of manufacture of this peculiar ceramic vessel type, a production that lasted from at least the 11th to the 14th century based on dated tomb discoveries and finds from the Sinan shipwreck of the early 14th century. The present example was purchased twenty-five years ago in Hong Kong and has been joined over the years at Kaikodo by other representatives of the type. While the vessels are all alike in form as well as unglazed exteriors, the characteristic basket pattern and dots of glaze on the exterior, and fully glazed interiors, they vary primarily in size. This has led to the suggestion that they might have been measures of some sort and are sometimes referred to as grain or rice measures. Further variations—in glaze color and workmanship for example—suggest more than one site of manufacture, the Jizhou area in Jiangxi at least one other source for the wares.