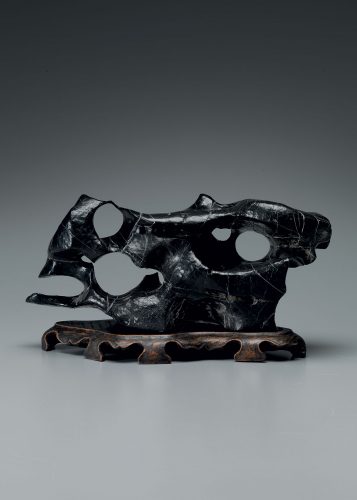 One side of this horizontally oriented stone is characterized by explosive hollows, sharp pinnacles and circular cavities, the opposite side by less turbulence and greater serenity. The intense black color, bright sheen, slightly rippled surface, and white to yellow-stained calcite inclusions identify the stone as one variety of Yingshi, named after Yingde in Guangdong province, an important source for fine-grained limestone desired by the Chinese elite in their efforts to acquire rocks for their gardens and studies. Ying stones had been discovered and appreciated as collectables already by the Song dynasty and during the Ming period they became popular alternatives for the highly prized but increasingly scarce Lingbi stones.

A special quality attributed to spirit stones, in the West more commonly referred to as “scholars’ rocks,” was their ability to project or to suggest something beyond their own identities. They are usually felt to suggest vast and mysterious landscapes, mountains and valleys that one might wander through in the mind’s eye in the presence of and inspired by such stones. At the same time, the present rock might also suggest the form of a horse or dragon head with jaw opened under the gaping nostril and the deep-set open eye, wide and round, beneath the skullcap. Such stones were not only a source of wonder, a spark to the imagination, but also objects with which their owners often felt a deep kinship. This sentiment is captured in a fan painting by the 19th-century master Ren Yi, “Mi Fu and Rock Friend,” Mi Fu being the renowned 12th-century scholar-artist-connoisseur par excellence.[1] If rocks do represent something, that something is in the eyes and mind of the beholder, a stone’s earthly agenda determined by the admirer or avid collector.